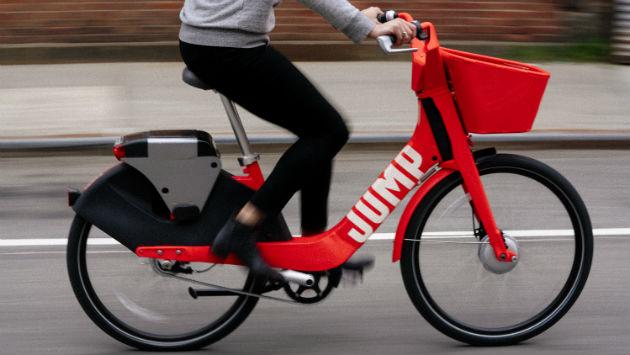 At a meeting last Wednesday, members of the Transportation and Parking Committee walked through a marked up version of Chicago’s dockless bikeshare ordinance to see how it might be adapted to conditions here.

Evanston currently is the only city in the metro area other than Chicago to have the Divvy bikeshare program — which features bikes that have to be retrieved from and returned to docking stations.

Chicago now also has a total of four companies offering dockless bikes in a test program. The test is being conducted about as far away from Evanston as you can get in Chicago — with the northern boundary at 79th Street.

But given the rapid expansion of venture-capital funded bikeshare startups across the country, Jessica Hyink, Evanston’s transportation and mobility coordinator, figures it’s only a matter of time before they show up here.

And she says it would be better for the city to have a regulatory ordinance in place before they arrive.

The Jump bikes seemed to raise special fears at the meeting, because they have an electric power assist, meaning they can easily reach speeds of up to 20 miles per hour — significantly faster than the casual rider of a completely peddle-powered bike is likely to sustain.

“We need to get ahead of them,” Alderman Melissa Wynne, 3rd Ward, said of the dockless bikeshare companies.

Officials from Northwestern University who attended the meeting said they’re also concerned about services that offer electric scooters. Transporation Services Manager Paul Merkey said, “Scooters can get up to pretty high speeds. On sidewalks or in a bike lane they could become dangerous.”

Hyink said the city would likely want to impose “an equitability requirement” to assure that bikes were getting to locations that are otherwise underserved with transportation options.

She said she hopes to have a draft version of an Evanston ordinance to regulate the dockless bikes in time for the committee’s July 25 meeting.

Will regulations allow for enough bikes to be useful? (CityLab, 5/10/18)