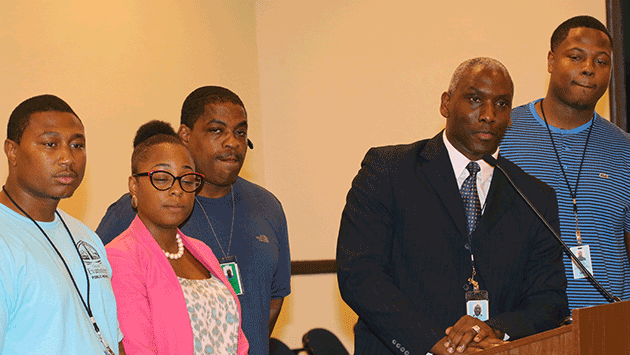 Evanston aldermen Monday night got an update on city efforts to get more young people engaged in school and careers.

Kevin Brown, manager of the city's Youth and Young Adult Program, said studies show that as many as 3.4 million Americans between the ages of 16 and 24 are chronically disengaged — they've never been in school or in the workforce after turning 16.

And another group roughly the same size is currently disengaged — although they've been involved in some school or work activity during their young adulthood.

They're what recent research calls "opportunity youth" — individuals who will cost society a half-million dollars or more in social program and other costs if they aren't guided to a more successful life path.

Many will end up pursuing a life of crime and spend much of their life in prison.

Brown says an Evanston 150 report claimed there may be as many as 3,000 "opportunity youth" in Evanston.

He says that since the city's program began in March 2012, he and his assistant director, Porschia Davis, and two full-time and two part-time youth outreach workers have served 416 clients, and he anticipates the total will reach 500 by the end of this year.

In addition, Brown says, the city's summer youth employment program has provided jobs to over 500 young people this year and he hopes to grow that number substantially in the future.

"We know from research that if we can get to 1,000 young people employed over the summer that will have a significant impact on reducing criminal activity in the community," Brown told the aldermen.

He said 43 young people have been placed in a career pathways program run by the city and the Youth Job Center, and about 70 percent of those participants have now been in permanent jobs for more than a year.

And, he said, the city has found permanent or part-time employment for 130 other young people and placed 13 in housing.

Aldermen Delores Holmes, 5th Ward, and Coleen Burrus, 9th Ward, asked about expanding efforts to reach the families that the troubled young people are growing up in.

"We need to work with families if we're going to make a substantial change. Without a two-generation approach we'll not reach as many people or have long-range effects," Burrus said.

Brown said he would return to the council soon with a proposal to expand the city's outreach to families.

The Economic Value of Opportunity Youth (.pdf) Corporation for National and Community Service