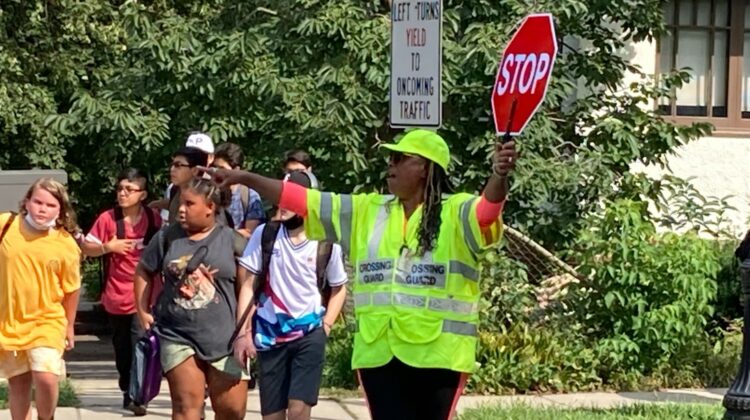 Parking Manager Michael Rivera told the City Council Monday night that the crossing guard program costs the city about $650,000 a year under a contract with Andy Frain Services.

In addition the city uses parking enforcement officers to fill in when a crossing guard doesn’t show up for work — something that has happened more often since the COVID-19 pandemic.

Rivera says that costs the city roughly $150 an hour in lost revenue from traffic tickets that aren’t issued while the PEOs are filling in as crossing guards.

Currently only Evanston Township High School and Chiaravalle Montessori School reimburse the city for the cost of crossing guards, while Evanston/Skokie School District 65 and two parochial schools, Pope John XXIII and St. Athanasius, do not.

Rivera, in a memo to the City Council, said the city has paid for the crossing guard services for more than 20 years but that state law does not require the city to provide the service.

He says the goal would be to have the schools have their own contracts with a private vendor, which would remove the city from any liability for the crossing guards’ performance.

He also said several other Illinois communities have reached agreements with their school districts in recent years under which the schools pick up part or all of the cost of the crossing guards.

Rivera said the city could ask the schools to pick up the full cost gradually over a three year period. But Ald. Cicely Fleming (9th) suggested having them pick up at least half the cost next year. “It should not be out of the realm of possibility” for District 65 to find $250,000 to cover half of the cost next year, Fleming said.

Ald. Tom Suffredin (6th) suggested that the schools could fill any crossing guard vacancies with parent volunteers. “I think we should stop paying for this,” Suffredin added.

Mayor Daniel Biss summed up the discussion, saying there was “broad agreement” that the city shouldn’t be subsidizing crossing guards for private schools and should phase out subsidizing guards for District 65.