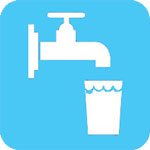 Evanston aldermen Monday night voted to increase the city's water rates by 3 percent starting at the middle of next year.

Utilities Director Dave Stoneback estimated that the increase would cost the average customer about $1 more on each water bill.

Aldermen and City Manager Wally Bobkiewicz emphasized that the 3 percent increase would only be on the water portion of the utility bill — that it would not affect the sewer or sanitation charges.

For a typical customer, water charges make up less than a quarter of the total utility bill.

Bobkiewicz said the city has been inconsistent in the past in setting water rates — letting them go unchanged for years and then imposing a big increase all at once.

He said he wants to be more consistent, and also wants to make sure that there is adequate money to fund improvements to the city's aging water infrastructure without increasing the city's debt burden.

The aldermen voted unanimously to introduce the rate increase ordinance Monday. They're scheduled to take a final vote on the increase on Dec. 10.

The aldermen also gave final approval Monday to the city's 2013 budget, which engendered far less controversy than budgets in recent years which contained sharper cuts in city staffing and services as well as big tax increases.

The 2013 budget, for the first time in several years, does not contain an increase in property taxes and it calls for a net reduction of only five staff positions.

The aldermen also approved $571,000 in funding for Downtown Evanston, but voted to take more of the money from the Washington National tax increment financing district and less from the Economic Development Fund than had been proposed by city staff.