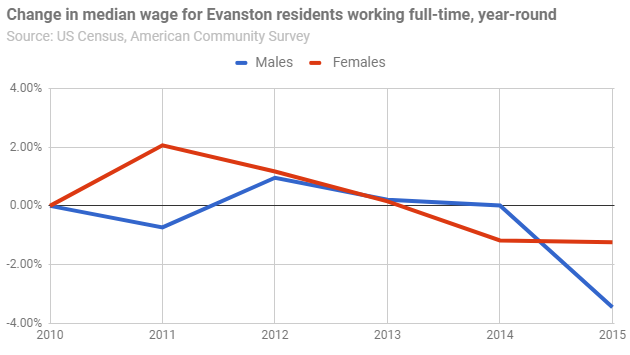 Evanston city employees have seen wage increases of 2.5 percent or more annually in recent years, while the earnings of Evanston residents have generally declined.

Data from the U.S. Census Bureau’s American Community Survey shows that the income of males working full-time, year-round in Evanston fell 3.45 percent between 2010 and 2015, the most recent year for which data is available.

Females working full-time, year-round did slightly better, losing only 1.24 percent — although the median wage for men, of $68,381 in 2015, was still substantially higher than the $52,381 median earned by women.

The city is currently negotiating new labor contracts with three of its four unions to replace deals that expired at the end of 2016.

And the expired AFSCME contract contained pay hikes of 2.6 percent, 2.5 percent and 2.4 percent.

The city’s three-year agreement with the police sergeants continues through this year, with pay hikes of 2.7 percent, 2.7 percent and 2.5 percent.

As aldermen meet tonight to discuss what to do about a projected $4.3 million revenue shortfall for this year, one of the items under consideration is to make a proposed 2.75 percent increase in city employee wages for this year that has been part of the union contract negotiations retroactive only to July 1 rather than Jan. 1.