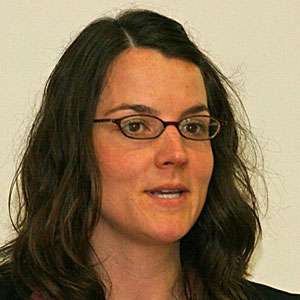 Evanston is in the midst of a competition with 30 other communities around the country to receive the first star ratings in a new environmental sustainability program.

At a Sustain Evanston meeting at the Levy Center Saturday, the city's sustainability coordinator, Catherine Hurley, provided an update on what she described as a massive data collection effort to measure how the city is doing.

Since the city was invited to participate in the Sustainability Tools for Assessing and Rating, or STAR, program a year ago, to receive a stFor the past year, Evanston has participated in a national pilot program to measure how cities across the country add up when it comes to sustainability.

STAR Communities is the first national framework and certification program designed to measure sustainability in communities nationwide. The program was designed in conjunction with local governments, the U.S. Green Building Council, the National League of Cities and the Center for American Progress, in addition to several hundred volunteers from federal agencies, various state agencies and private corporations.

Evanston will be one of the first 30 American communities to receive a STAR rating. The program requires a $5,000 fee, Hurley said in an interview following her presentation. The fee covers access to the program's tools, technical and other types of support, she said.

Hurley and a small team of unpaid interns, in addition to city staff across all departments, have been gathering data that corresponds to the seven categories covered by the STAR rating.

Those categories include the built environment, climate and energy, economy and jobs, education, the arts and community, equity and empowerment, health and safety and natural systems.

Sustainability is defined as an issue that impacts not only the environment, but the economy, equity and general livability in a community as well, Hurley said.

"One of the big things in this process was just figuring out what we're doing in all these areas," she said.

As part of the program, the city is given a list of actionable activities and measurements in each category. A community racks up points based on measurable data, ordinances and other verifiable community activities. In order to achieve a rating, the city must upload all of this data to the STAR website, Hurley said.

STAR ratings range from three to five stars. Hurley said the city's current goal is to achieve a four-star rating in the program.

No final data has been submitted, but by current estimates, the city aims to receive between 52 and 87 percent of the total points offered in each category. According to Hurley's presentation, Evanston's strongest category is education, the arts and community, and its weakest is equity and empowerment.

Hurley said the city has more arts activities, including performing, musical and visual arts, than many larger communities. The city also boasts a large number of historical districts and more social and cultural opportunities than similarly sized communities, she said.

But environmental justice, a subgroup of the equity and empowerment category, is something the city needs to spend more time working on, Hurley said.

Environmental justice, essentially, is the reduction and elimination of toxic or polluted environments located near low income and minority communities.

In recent years, the city has identified the Veolia transfer station on Church Street as an environmental nuisance worth getting rid of. The city's "aggressive" actions on this issue has earned it some points in the environmental justice category, Hurley said.

But she said Evanston needs "a community wide plan for other sites that could also be an issue."

Once Evanston receives it's STAR rating, it will have a shelf-life of three years, Hurley said. But in order to maintain that rating three years from now, the city will need to make continuous improvements on whatever work has already been done.

Hurley said the she plans to host a meeting on Oct. 15 to invite community groups who may have usable data they can contribute to the program. She plans to have all the data collected by Nov. 30, with a goal of submitting all necessary information to the STAR program by Dec. 20. At that time, the city should expect to receive its rating within 30 to 60 days.

With the rating in hand, Hurley expects that the city will have more meetings about its sustainability efforts and how to improve upon them.