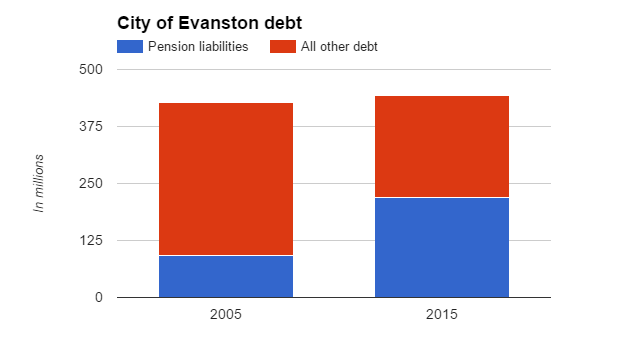 Despite reducing non-pension debt by more than $111 million, the City Evanston still faces a higher total reported debt burden than it did a decade ago.

The primary reason is a gradual effort to be more realistic about the size of the city's pension obligations.

As reported in a recent presentation to aldermen by the city's chief financial officer, Marty Lyons, unfunded pension liabilities — mostly for police and firefighters — have grown from $92 million to $218 million, while all other debt has shrunk from $336 million to $224 million.

As the city has ratcheted down the assumed yield from pension investments and made other assumptions more realistic — like life expectancies — the reported pension funding shortfall has more than doubled.

And it still probably understates the total pension liability, since many observers believe the current pension fund rate of return assumption of 6.5 percent could be as much as a full percentage point too high — given state-imposed restrictions on how the public safety pension boards can invest their funds.

The city has gradually increased its payments to the pension funds, and plans to boost the contribution by another $1.65 million in 2017, to a total for the year of $18.25 million. But despite the increases, the reported funding level of the pension funds still hovers at or below the 50 percent mark.

The high debt level raises doubts about the city's ultimate ability to pay — and that has caused the rating services Fitch and Moody's to lower the city's bond rating from its once top-rank position, which in turn increases the interest rate on the debt — placing a further burden on Evanston taxpayers.

The City Council is scheduled to adopt the 2017 city budget next month.