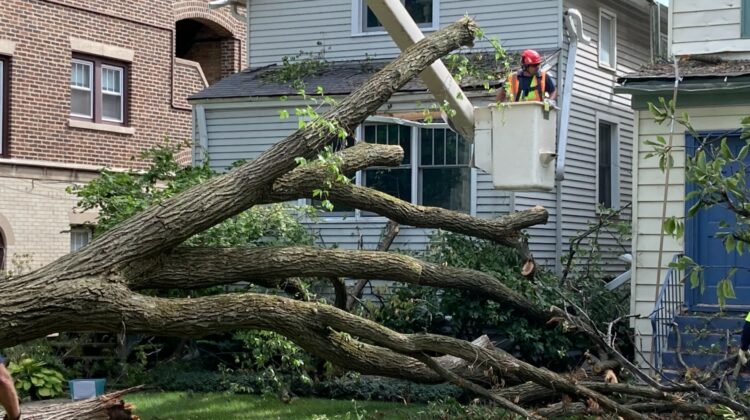 A city crew chops up a tree Thursday morning that fell into the front yard of a home on Maple Avenue.

With about 350 Evanston customers still without electric power, city and ComEd crews were busy Thursday cleaning up the remaining damage from this week’s storms.

Two storms, one Tuesday evening and a smaller one on Wednesday, toppled trees and branches that pulled down utility lines. At one point, several thousand Evanstonians were without electricity.

Now outages are scattered through town. For some, power might not be restored until Friday afternoon.

ComEd says about 22,200 customers across the metro area were without electricity as of 10:50 a.m. Thursday.

If thunder, wind, and rain were the primary sounds during the storms, today the most common noises were chainsaws, wood chippers and trucks raising aerial buckets.

On Milburn Park, just off of Sheridan Road near Northwestern University, a ComEd crew was dealing with power lines tangled in trees.

Not far away, in the 2100 block of Maple Avenue, a City crew dealt with a tree which tangled with a house … or at least a small part of the house.

But perhaps the most incredible sight was what’s left of a huge tree and a small car in the 2300 block of Sherman Avenue.

On Wednesday, city workers chopped up the giant elm tree, believed to be more than a century old, but a stump still remains, along with pieces of the sidewalk pushed up as the tree fell across Sherman Avenue.

“It’s just incredible how it came out of there,” said neighbor Terri Drews, looking at the tree.

Another neighbor, Sarah Lashley, said “it makes my heart sad” to see “the beautiful old tree” no longer part of the community. But she said “at least it fell the other way,” and did not hit the nearby apartment building.

The tree did, however, hit and crush a silver Acura as the huge trunk toppled across Sherman Avenue.

Another neighbor said there was no doubt that if anyone had been in the car when the tree came down, they would have been killed.

Looking at the remains of both the tree and the car, that neighbor sighed and summed everything up with one word. “Nature,” he said.