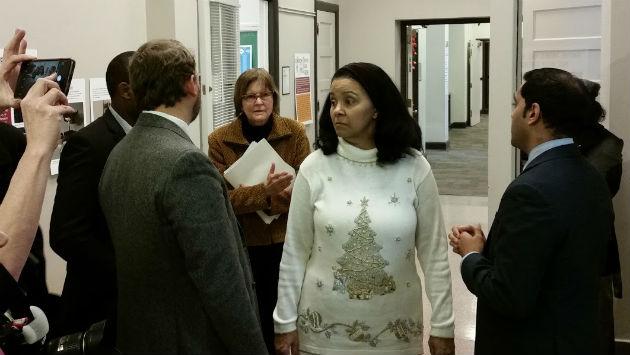 The Evanston Electoral Board postponed action on three ballot challenges today after City Clerk Rodney Greene fell ill in the midst of the board's hearing.

Attorneys for objector William Arndt had withdrawn their challenge to mayoral petitions filed by Alderman Mark Tendam, 6th Ward, and the board was hearing closing arguments for the two other challenged mayoral candidates when Greene slumped in his chair, suffering from what a fellow electoral board member, Alderman Ann Rainey, 8th Ward, said appeared to be a diabetic incident.

With city staffers and police officers assisting Greene, Mayor Elizabeth Tisdahl, the electoral board's chair, called for the meeting to be recessed until 9 a.m. Monday morning.

Earlier in the meeting, Greene had played a recording of a voice mail message he said had been left for him late last month by Alderman Brian Miller, 9th Ward. 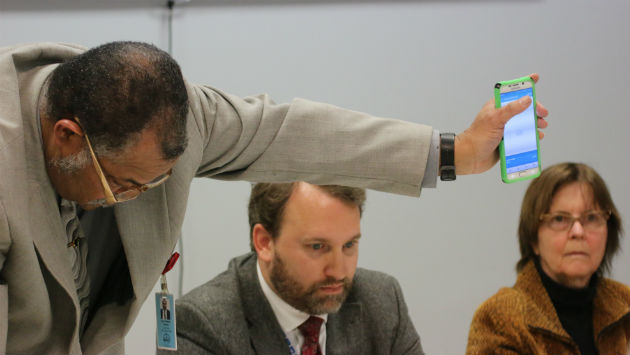 The recording was indistinct to others in the room, but Greene suggested it showed that Miller had triggered the ballot challenges in an effort to advance his own candidacy for mayor.

State campaign finance records show that Arndt is a contributor to Miller's campaign.

The postponement also affects the challenge Lynne Greene filed to the candidacy of the only challenger to her husband in the clerk's race, Devon Reid. 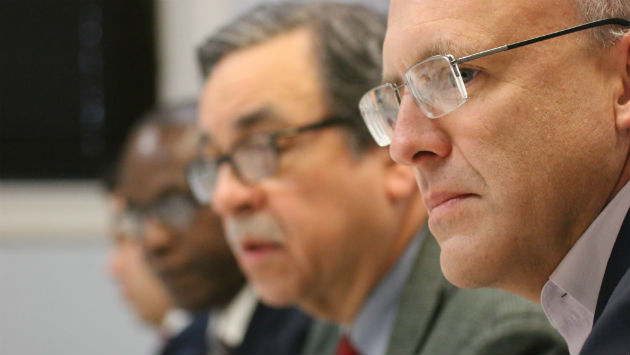 Attorneys for the objector in the mayoral challenges tried to introduce newly-uncovered evidence that in a 1992 referendum Evanston voters had approved holding a February primary election any time there were more than two candidates for mayor, and that the referendum said there would be no April general election vote for mayor if any candidate got a majority of the vote in the primary.

But the electoral board ruled that they had failed to meet the deadline for submitting such evidence and they would have to base their case for disqualifying candidates Gary Gaspard and Steve Hagerty, solely on their original argument that the reference to the April general election on the candidates' petitions was faulty.

Haggerty's attorney, James Nally, argued that state law contains a strong presumption in favor of ballot access and that the petitions, which showed the April 4 election date, needed to be considered along with Hagerty's statement of candidacy, which said he would run in the April 4 election, unless there was a Feb. 28 primary in which he would also need to run.

"Illinois law is very clear that the candidacy papers are to be read as a whole," Nally said, and, read as a whole, there's no possibility of confusion about what office Hagerty is seeking.

Gaspard, speaking on his own behalf, said the confusion over dates "has caused no harm to anyone" and no potential voters have been deceived.

It was the intention of the objections to create chaos and suppress the will of the voters, Gaspard added.

Tendam's campaign, after the challenge to his candidacy was withdrawn, issued a statement quoting Tendam as saying, "This most recent intrusion of Chicago-style politics into our local elections is unfounded and certainly unwanted. Evanstonians hold access to the ballot and open elections for all potential candidates in high regard."

"I look forward to a serious and enthusiastic campaign with all the candidates who have petitioned to have their names on the ballot," Tendam added.