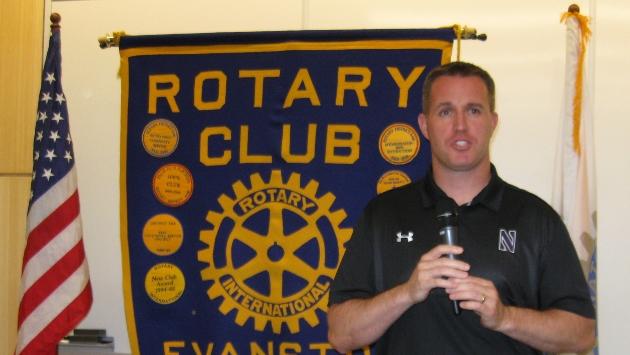 While he didn’t exactly predict a Rose Bowl appearance, Northwestern University’s head football coach Pat Fitzgerald did say Thursday he expects his Big Ten squad to be competitive this year.

Speaking at the regular weekly meeting of the Rotary Club of Evanston at Rotary International’s headquarters on Sherman Avenue and Grove Street, the coach mostly answered questions during his 30-minute appearance at the luncheon club.

He said the team “is in the best place we’ve been in awhile” and that it appears to be “in a competitive position.” The players are focused and they’re driven, he contended.

Now in his tenth year as head coach, Fitzgerald spoke highly of the character and intellect of his players, who he said are placed in a highly stressful position at a very early age.

Much of his time is spent in recruiting promising high school players, he noted, and he always asks his potential players about their character and involvement in their community.

The coach, who grew up in suburban Orland Park, says he has now spent most of his life in Evanston, which he described as a community that has changed a great deal in the 20 years he has been based here as a student and as a coach, “but it hasn’t even scratched the surface for where it’s going to go.”

The 2015 football season begins in less than a month, when the Wildcats meet the Cardinals of Stanford University at 11 a.m. on Sept. 5 at 90-year-old Ryan Field on Central Street in north Evanston.