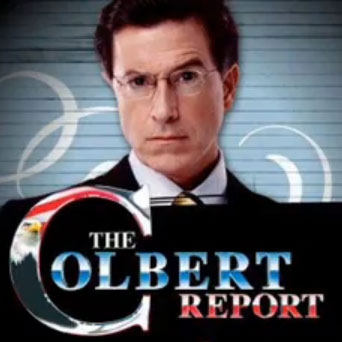 “Stephen Colbert has brought new words like ‘truthiness’ and ‘Lincolnish’ into the lexicon,” said Viorica Marian, associate professor of communication sciences. “We had to invent a new language to do our research, and no one invents words as readily as Stephen Colbert. Naming our new language after Colbert was a no-brainer.”

The study — now online (.pdf) and appearing in the print edition of “Cognitive Science” by fall — finds that bilinguals compared to monolinguals experience less interference from their native language when listening to speech in a newly learned language. And that makes them superior new language learners.

“It’s important because prior research has linked bilingualism to all kinds of benefits, including delaying dementia, improving attention and generally sharpening the mind,” says James Bartolotti, study co-author with Marian.

Study participants first were trained to recognize invented Colbertian nouns — “shundoe” for “acorn,” “glolay” for “apple” and “lateep” for “hammer,” for example — until they reached a base level of proficiency. They then were asked to match each new word with the correct image among two pictured objects.

By teaching Colbertian to study participants, the researchers for the first time were able to compare monolinguals’ and bilinguals’ abilities to manage interference between languages. The invented Colbertian words were specifically designed to bear no relation to words in either English or Spanish.

A learning game allows anyone to learn Colbertian online. And it’s not just for fun, say the researchers. Participation will provide useful data on how people of different ages and backgrounds go about learning words in a new language.

“Being able to communicate in a new language opens up more of the world so there’s an obvious, immediate and tangible benefit,” says Marian. “ What we and other researchers have demonstrated is that bilingualism also has subtle, far-reaching benefits and consequences for the brain.”

Previous work by Marian and others shows that bilinguals experience interference from the language that they are not using at a particular moment. However, until this study, “Language Learning and Control in Monolinguals and Bilinguals,” nobody had looked at how well that experience transfers to novel language learning or how one’s native language interferes with a new just-learned second or third language.

“Our comparative study would have been impossible without inventing Colbertian, since by definition monolinguals only know one language,” says Marian. The researchers expect their novel language learning task will be a useful technique for future researchers trying to pinpoint how the skills involved in managing multiple languages are affected by lifelong bilingualism.

They monitored Spanish-English bilinguals and English monolinguals through mouse tracking and eye tracking as study participants tried to match their newly learned Colbertian words with the correct image.

“It’s important to understand what happens when you listen to speech,” explains Bartolotti. “Words unfold over time, and your brain plays a mental game of Pictionary with each word, making educated guesses and refining each guess as more information comes in.”

For example, when you hear the /k/ sound, your brain starts thinking of words such as “comb,” “castle,” “cat.” As you hear more of the word (the sound /k/ followed by /a/, for example), it becomes clear some guesses (i.e. “comb”) are wrong.  Unless you can suppress incorrect words, the incorrect words continue to compete for selection.

Previous research from the Northwestern Bilingualism and Psycholinguistics Lab in the School of Communication shows that bilinguals will entertain guesses from all the languages they speak. So in addition to “cat” and “castle,” a Spanish speaker may also think “casa” and “cabeza.”

Among the questions the researchers asked was: Are bilinguals — who have more practice separating languages but also are likely to have more words in their vocabularies given their multiple language knowledge — better off than monolinguals learning a new language? The answer is a definitive yes.

The challenge of bilingualism is keeping two languages distinct and deploying them appropriately. “If I’m in Paris, I need to avoid English words to be understood by French speakers,” says Bartolotti. “It turns out that skill, once acquired, helps you learn a new language. And that knowledge of another language confers all kinds of benefits.”