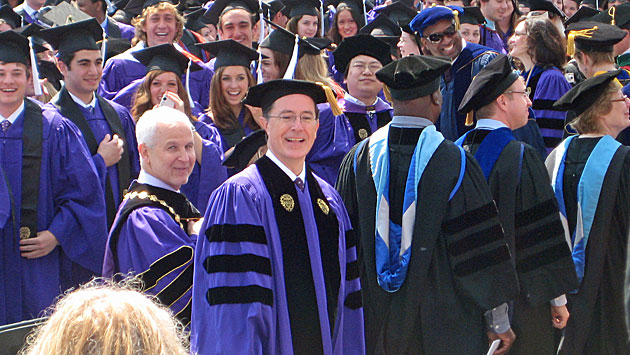 From the moment that Colbert and Northwestern President Morton Schapiro made their way up the aisle during the opening procession, the crowd was almost giddy with applause on the picture-perfect day at Ryan Field.

Colbert the character, he said, graduated from Dartmouth. “So he was there last weekend and heard Conan [O’Brien] speak,” Colbert said. “It was a really good speech, but he was hoping it was going to be [Jay] Leno.”

His talk was filled with Northwestern-related references, including the yellow slip of paper with a note from the dean, instead of a diploma, he said he received during his commencement ceremony 25 years ago. “You are starting way ahead of me,” he told the graduates.

He especially had fun at Northwestern’s expense about the University closing down in February for the first snow day in more than 30 years. “You were hoping I hadn’t heard about that,” he said as the crowd’s laughter egged him on. “I’m sorry, that is weak.”

During his first winter at Northwestern, Colbert said he endured what is still the coldest day in Chicago’s history, January 20, 1985. It was “negative 27 degrees, negative 83 with the wind chill,” he said. “Did NU close? No! We went to class. Well, not me. I was a theatre major, and I didn’t go to class that often, but we were supposed to.”

And he referred the notorious Human Sexuality class session this school year in which two guest speakers performed a live sex show using a power tool.

He suggested that demonstration may have been why a recent poll rated NU students as having a lower sex drive than students at other schools.

"I saw some photos of the lab equipment and I’m thinking you may have been scared off sex forever." He then went on to get a roar from the audience by calling it "a stealth abstinence program or a viral ad campaign for True Value hardware."

Before getting to what he called “the meaningful part of the speech,” he also poked fun at Northwestern choosing him as the commencement speaker.

"The clearest example of how this once great institution has failed you students,” he said, “in 1986 our commencement speaker was George Schultz, Secretary of State, fourth in line to the president.

“You get me, basic cable's second most popular fake newsman. At this rate, the class of 2021 will be addressed by a zoo parrot dressed in a mortarboard, that has been trained to say, 'Congratulations.’”

President Schapiro conferred honorary degrees on Colbert (Doctor of Arts) and three other distinguished individuals. The three are Massachusetts Institute of Technology’s Barbara H. Liskov, whose achievements in computer science have provided the basis for virtually every software program underpinning today’s society (Doctor of Science); soprano Jessye Norman, one of the most celebrated opera singers of our time (Doctor of Arts); and the National University of Ireland Galway’s William A. Schabas, a leading authority on the death penalty and international criminal law (Doctor of Laws).