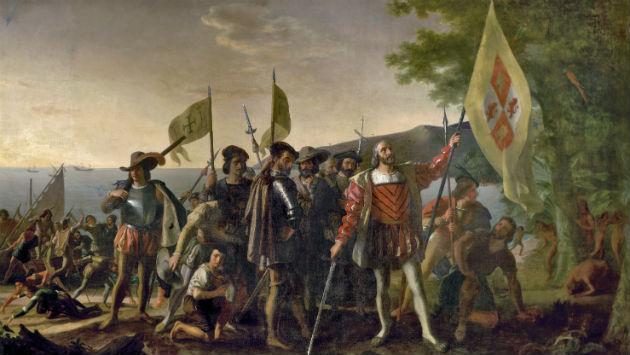 Mayor Elizabeth Tisdahl says her diplomatic skills failed her at a meeting Monday afternoon between supporters and opponents of celebrating Indigenous People's Day rather than Columbus Day in Evanston next Oct. 10.

The mayor says she was unable to find common ground between representatives of the Evanston-based Mitchell Museum of the American Indian — who persuaded her to agree to issue a proclamation designating that day Indigenous People's Day in Evanston — and fans of Columbus who said Indigenous People's Day would be a fine idea — as long as it wasn't on Columbus Day.

Kathleen McDonald, the museum's executive director, says the idea of celebrating native peoples, rather than the man whose voyage opened the hemisphere to European settlement, got its start in 1977 in Equador and has spread to a number of American cities ranging from Albuquerque, New Mexico to Seattle, Washington.

Richard O'Dwyer, deputy grand knight of the Evanston chapter of the Catholic fraternal organization, the Knights of Columbus, says the mayor created the controversy herself by deciding to issue the Indigenous People's Day proclamation before getting any feedback from anybody else.

"All they have to do is buttonhole her at Whole Foods, and if I want to get it changed back I have to launch a political campaign," O'Dwyer added.

Louis Rago, president of the Italian American Human Relations Foundation of Chicago, also was at the meeting and says his group offered to help the museum celebrate Indigenous People's Day, if they'd just move it to another day.

"I don't understand why it has to fall on Columbus Day," said Rago, whose group is part of a national effort by Italian American organizations to Save Columbus Day. "There are so many other days," he added.

"But there's a group of people that feel that whatever good came from Columbus landing on the shores of the Americas, all the evil that's happened since 1492 is his fault," Rago added. "There's no way you can convey anything to people who have that mindset."

"I mean, George Washington had slaves," Rago added. "None of the founders of our country would be canonized a saint of the Catholic Church, but we have to admit that their deeds were exceptional."

And, Rago suggested, it's unfair for Evanston to try to shove Columbus aside, when it is named after John Evans, who is widely accused of complicity in a massacre of Indians when he was governor of the Colorado Territory in 1864, the year after Evanston was founded.

O'Dwyer says he'll have to talk to other K of C members before deciding whether to take any further action on the issue.

While Columbus Day is a federal holiday, it has not been formally celebrated in Evanston in recent years. City offices and schools are open that day, although garbage pickups are delayed.