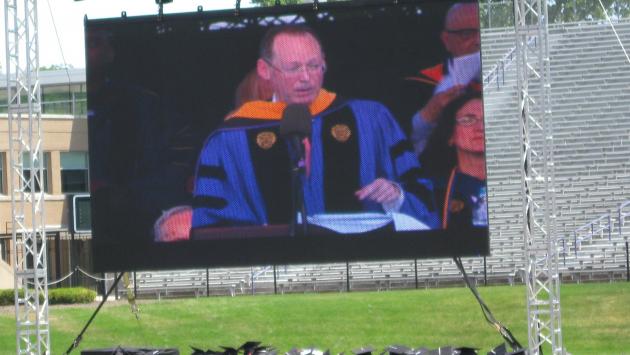 Northwestern University’s commencement speaker Friday admonished the Class of 2012 to seek partnerships with others in order to solve the world’s most pressing problems.

Speaking at the university's 154th commencement ceremony at Ryan Field in Evanston, global health pioneer Dr. Paul Farmer said “your most important achievements will come from working with others.”

The west stand of the university’s football stadium on Central Street was packed with friends and family members of students who received graduate and undergraduate degrees in an outdoor ceremony under a blazing midday sun. 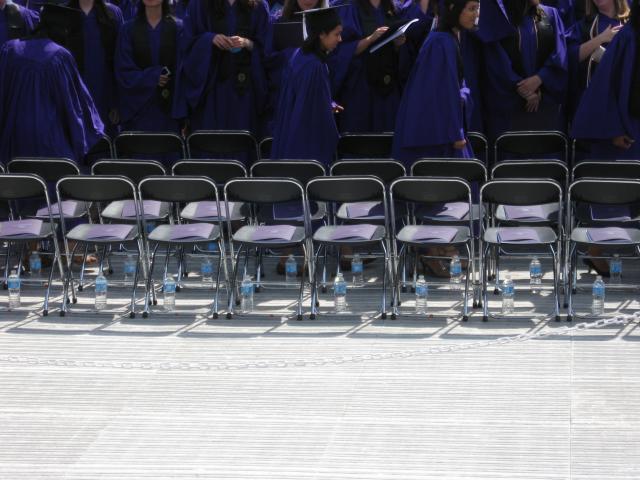 Top: Dr. Farmer's image is projected on a giant screen at Ryan Field. Above: Graduates file in and find bottles of water beneath their chairs to help them cope with the oppressive heat.

Among the recipients of honorary doctorate degrees was Joan Ganz Cooney, the creator of the popular television series, Sesame Street, that was responsible for many of the graduates learning their ABCs and how to count to 10. They greeted her with enthusiastic hoots and applause.

Other honorary doctorates were awarded to Martha L. Minow, dean and professor of law at Harvard University; William D. Nix, professor emeritus of engineering at Stanford University; and Dr. Farmer.

The speaker told of his extensive volunteer work in Haiti that was featured in a best-selling book by Tracy Kidder, Mountains Beyond Mountains: The Quest of Dr. Paul Farmer, a Man Who Would Cure the World.

Born in Massachusetts in 1959, Dr. Farmer moved to a small inland Central Florida town of Brooksville at the age of 7 and lived with his family in an old school bus converted into a mobile home that was wired for electricity, but lacked running water.

To earn money, the family picked citrus fruit alongside Haitian migrant workers. It was Farmer’s first encounter with Haitian people, but it developed into a lifelong involvement. 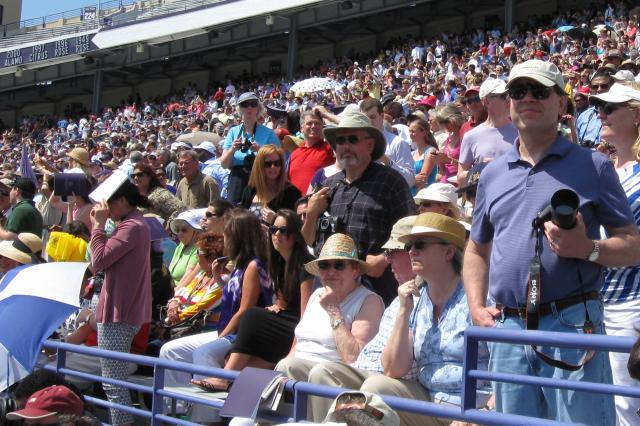 Families and friends watch the proceedings at Ryan Field.

He went on to study medical anthropology at Duke University in North Carolina and later to pursue a medical degree and a doctorate in medical anthropology at Harvard. But he made frequent visits to Haiti, where he helped a one-room clinic develop into a complete hospital with a nursing school, operating rooms, satellite communications, and a blood bank.

“Good medical care,” he explained to the graduates, “cannot be delivered in low-quality hospitals.”

Dr. Farmer left the graduates with two pieces of advice: ”Try to counter failures of imagination, and as you imagine solutions to problems, harness the power of partnerships.”

Not all of Northwestern’s diplomas were handed out at the Ryan Field ceremony. The medical school and law school convocations were held Thursday, and the Kellogg Graduate School of Business was scheduled to honor its graduates later on Friday.