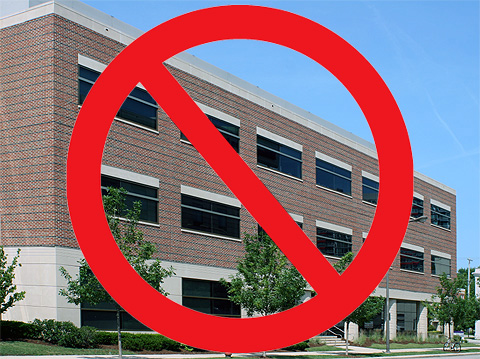 Nearly all modern buildings suggested for landmark status were dropped during a meeting Tuesday night. The office building at 1001 University Place in Research Park received the lowest rating of any building considered — an average of 1.75 on the 10-point scale the eight commissioners present for the meeting used to rank the buildings.

But some older buildings were also dropped from consideration, including the Northwestern University shops at 906-920 University Place.

Among the other losers was the one-story colonial revival office building at 1515 Chicago Ave. — part of the site for the proposed Optima Promenade high-rise condo development recently rejected by the City Council. 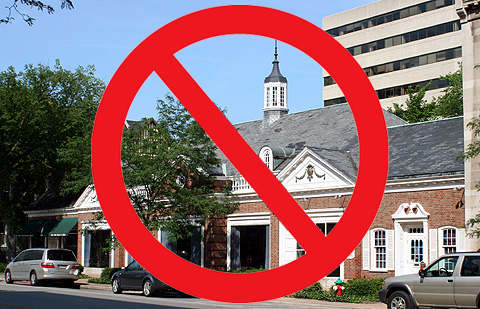 Dr. Thomas Stafford of 1206 Croft Lane, told the commission he recalled the building as the home of the Tally Ho restaurant when he set up his medical practice in the Carlson Building in 1966.

He said that later, as a member of the city’s Plan Commission, he worked on changes to the zoning code that he hoped would preserve a certain pleasant ambiance in the community, that he said was exemplified by the 1515 Chicago Ave. building.

But Commissioner Jon Pohl said, “I can’t see where this building fits any of the criteria for landmark status.” He said its colonial revival styling would be more appropriate on a residential building than a commercial one.

Commissioner Susan Rundle said it doesn’t fit in with the buildings to either side and “does nothing for the streetscape.”

And Commission Chairman Chris Carey said he had always seen the building as something of a space filler waiting for a more promising development to come along.

The commissioners rated it a 2.5.

Around the corner though, at 518-526 Davis St., the commissioners were more sympathetic to a two-story limestone-faced retail and office building that also forms part of the Optima Promenade site. They gave that a 6.9 rating — just shy of the 7.0 cutoff that they tentatively set for continuing consideration of a potential landmark.

Commissioner Ann Dienner said “the facade is so elegant” and she suggested that even if the site is redeveloped, the new project might try to preserve the building’s face.

The building at 708 Church St., which members of the Downtown Plan Subcommittee of the Plan Commission had suggested as a strong prospect for landmark status, drew only a 4.9 rating from the preservation group.

Ms. Guthrie said, “I didn’t feel that this was anywhere near the same quality” as the already-landmarked Hahn Building next door.

Ms. Dienner said, “It has no distinguishing factors.”

But Commissioner Thomas Prairie said, “I have more sympathy for it than that. It’s not gaudy in its ornamentation, but not plain either.” He added that it provides a nice counterpoint to the mid-rise Carlson Building to its east and the high-rise Sherman Plaza development to the west.

Buildings that made the cut by getting at least a 7.0 rating included:

In addition, the commissioners decided to have further discussion about several lower-rated buildings, including:

The city has already designated 30 of the downtown area’s roughly 200 buildings as landmarks. (Photos of the existing landmarks are available here.)