Evanston’s Human Services Committee decided on Tuesday to abandon its proposal to cap the number of cats a resident can own. 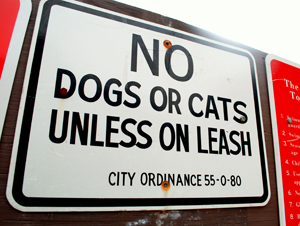 An Evanston resident can still bring his five cats to Dawes Park — if they’re leashed.

“To put a limit –- an arbitrary limit –- on the number of animals serves only to punish the responsible and to drive underground the people who are already flying under radar by not licensing their animals,” Constance Rajala, member of the Community Animal Rescue Effort.

She and other members of CARE blasted the proposed ordinance, saying it would do nothing to deal with cat hoarding, or when a person, usually mentally ill, collects so many cats that he or she cannot take care of them and they become a nuisance to neighbors.

The committee proposed the ordinance to the city council in May after receiving complaints from residents who were bothered by the stink of cat urine emanating from a neighboring residence housing 90 cats. Alderman Judy Fiske, however, requested at a full council meeting in June that the council send the proposal back to the Human Services Committee for further discussion.

“Hoarding is a mental health issue,” said Fiske, who owns a pet store, at the committee meeting. Limiting the number of animals that can live on a premise would not effectively prevent hoarders from hoarding, she said.

To control cat hoarders, the city can use existing animal cruelty, pet licensing and public nuisance ordinances as well as a state law that addresses pet hoarding specifically, she said.

“You seem to have a large arsenal ready to address these issues,” she said to the committee.

She suggested that Evanston expand its animal cruelty ordinance to include animal hoarding. Such an amendment would allow caring, sensible pet owners to keep their cats even if they had more than four, she said.

Although there are no statistics available as to the number of homes the ordinance would affect, both Lovinger and Fiske said some Evanston residents fit into this category. Some take in strays from the streets, a practice that the ordinance, if approved, would discourage, they said.

However, the discussion was not without objections.

“If we are going to have a limit on one species we should have it on another,” Alderman Delores Holmes said, referring to an ordinance that caps the number of dogs that can be owned to three.

Dogs need to be limited because they can potentially make much more of a nuisance than cats, Fiske said.

Current laws do not give her enough authority to expediently attack cases of animal hoarding because she could not gain access to the hoarder’s home, Flowers aid. It took her nearly two years to remove the animals from one resident’s house.

“How is one more ordinance saying you can only have four cats going to allow you entrance to the home if everything else didn’t?” Lovinger said in response.

Ultimately, Health and Human Services and CARE agreed that they shared the same goal of ending animal hoarding. The committee has charged the two organizations with working together to develop a more effective solution and reporting back to the committee.

“We want the same the same thing,” Flowers said after the meeting as she shook hands with Lovinger.