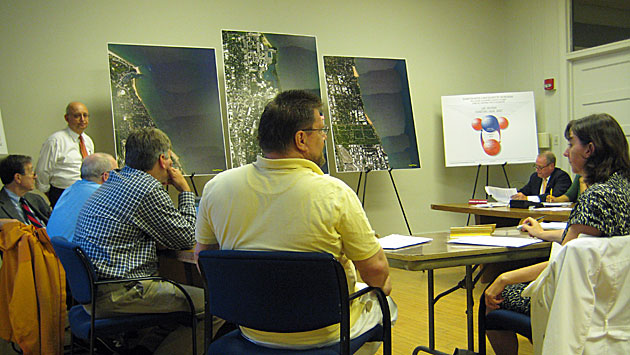 Evanston's Lakefront Committee Wednesday night dug into a controversial proposal to build a marina and convention center on the city's lakefront.

The nine-member panel appointed by the mayor held its first meeting last month and is scheduled to report back to the City Council by mid-August.

The committee is reviewing the feasibility of a concept proposed by local architect Mike Vasilko, who argues that the city could dramatically increase economic activity and tax revenue by more intensively developing the lakefront.

That concept is diametrically opposed to a Lakefront Master Plan adopted three-and-a-half years ago and conceived at the height of the economic boom, which generally called for preserving the entire lakefront as park-like open space.

But with city revenues continuing to sag as the economy only fitfully recovers from the recession, and with the city facing unfunded pension, bond and other debts that Vasilko says total over $450 million, some members of the City Council have concluded that lakefront development just might be a good idea.

So, surrounded by poster boards, Vasilko outlined theoretical development plans that could place a marina along the shoreline or offshore in the lake, fronting either city-owned or Northwestern University-owned lakefront property. 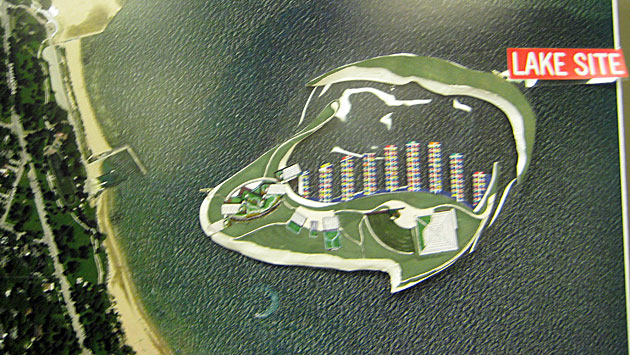 Under one scenario, a marina might be built on an artificial island off the lake shore.

Arts venues and a convention center, he suggested, could be built either on landfill, or existing park land, or facing the existing parkland on a block bounded by Church and Davis streets, Forest Place and Judson Avenue now occupied by high-priced single family homes.

Vasilko claimed it's too early in the process to worry about costs for the project, and said costs couldn't even be accurately evaluated before a potential location for the marina was determined.

He argued that a fully realized development could provide the city with world-class cultural venues that would turn the city into a national travel destination.

Although committee members agreed that Evanston needs to find new ways to generate tourism and revenue, they didn't agree about whether the project makes sense or where a marina might be located.

And the idea of adding any active uses to the lakefront was strongly opposed by some members — especially those who live along the lake shore.