The Evanston City Council’s Planning and Development Committee tonight approved a proposed settlement of a three-year legal dispute over the zoning of property on the southeast corner of Chicago Avenue and Main Street. 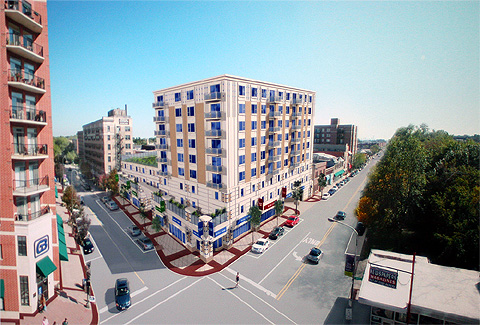 A view of the proposed building looking southeast.

The agreement would see a nine-story mixed-use building 99-feet tall built on the site. It would have ground-floor retail, two levels of parking and six floors of condominium apartments.

The city had sought to rezone the property from B3 to C1a, which would have reduced the maximum height allowed from 125 to 67 feet. But the then-owner of the property successfully argued in court that he was entitled to the original zoning because he had spent millions of dollars demolishing a building on the site and removing tenants from another building in reliance on being able to redevelop te propert under thatÂ zoning.

Alderman Melissa Wynne, whose 3rd ward includes the development site, said there wasn’t a lot of controversy over the project at a community meeting held earlier this month.

Community Development Director James Wolinski said there was "a good spirit of cooperation" with the developers and that they had given in-depth consideration to recommendations made by the city’s staff.

The full City Council is expected to approve the agreement at its Dec. 11 meeting.