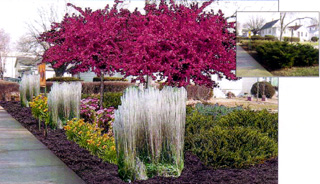 A plan to add new plantings to cul-de-sacs on Evanston’s west side was cut back Wednesday because of concern about city bidding policies.

The Economic Development Committee approved landscaping six cul-de-sacs in the neighborhood around the Evanston Plaza shopping center at Dempster Street and Dodge Avenue.

But it cut maintenance funding from the proposal to reduce the project cost below the $20,000 threshhold the city has set for requiring competitive bidding on contracts.

The cutback came at the insistence of Alderman Ann Rainey, 8th Ward.

Interim Community Development Director Dennis Marino said that because the spending was being done in the form of a grant to a neighborhood group, he didn’t believe the bidding requirement had to be applied in this instance.

Julie Westbrook of West Crown Park Neighbors, one of the community groups backing the project, said that at this point to delay the project long enough to get formal bids would mean missing the prime late spring planting season.

She said the neighborhood groups had worked with the only bidder, Nature’s Perspective Landscaping, on a similar project last year and were confident they’d do a good job. She added that given the relatively small size of the project they’d had difficulty getting other contractors interested in the work.

Nature’s Perspective, at 2000 Greenleaf St., is also located in the affected area.

Money for the beautification projects comes from a $200,000 fund established by the city with payments from the plaza’s developer when the city approved redevelopment of the shopping center in 1999.

Alderman Lionel Jean-Baptiste, whose 2nd Ward includes the affected neighborhood, said he would recommend the city seek competitive bids on a two-year maintenance plan for the cul-de-sac plantings.

The rendering above shows the proposed landscaping for the Greenwood and Dodge cul-de-sac, with an inset showing the current appearance of the site.