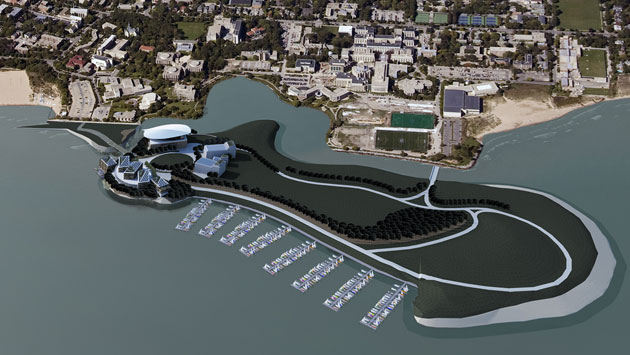 The decision by the the special Lakefront Committee appointed last fall to make a recommendation to the Economic Development Committee about the concept came on a 7-0 vote, with two committee members absent.

All five of the members who live near the lakefront were present for the vote. And four of them have long publicly opposed lakefront development.

But the committee did vote to commend Vasilko for his efforts in developing the concept.

Vasilko had revised the plan, in response to earlier criticism from committee members, to show the landfill site moved from a location directly east of the city-owned Dawes Park at Church Street to a position east of the current Northwestern University lakefill campus. (A rendering of the latest proposal is shown above.)

That attempted to answer criticism that the city's Lakefront Plan, adopted four years ago, called for only minimal development along the shoreline, because the plan dealt only with city owned property — not with the university campus.

Vasilko has argued that the development — which he saw as a location for major arts venues that would draw audiences from across the metro area as well as a convention center, hotel and marina — would be a major generator of tax revenue for the city and help it escape from its current fiscal problems.

He sought the committee's support for city funding of studies by independent consultants to assess the market demand for the facilities and their financial feasibility — studies that, based on the cost of a recent study of downtown arts venues, might cost the city around $50,000.

But the committee members — based either on their general opposition to lakefront development or a personal assessment that the project isn't feasible — didn't want to go there.

Alderman Melissa Wynne, 3rd Ward, said the project would bring "very intense commercial use" to the lakefront that she opposes.

Percy Berger, of 140 Dempster St., said that lakefront development was only one of many possible solutions to the city's budget problems and that all of them should be evaluated before deciding to move forward on such a dramatic alternative.

Alderman Judy Fiske, 1st Ward, said she didn't think money spent on a feasibility study would be well spent unless there was a clear indication that the university was interested in such a project — and no one in a position to speak for the university appeared at the meeting.

David Reynolds, the owner of the Homestead Hotel on Hinman Avenue, said hardly any performing arts groups generate more than half of their operating budgets from sales, "and I think it's a real stretch to think that first class arts organizations could come here and compete with" groups in downtown Chicago.

Alderman Coleen Burrus, 9th Ward, said the arts can generate revenue to some degree, "but not at the level to help us get out of debt."

"Arts organizations can't make money," Burrus said. "They bring in people, but its not huge dollars."

Chris Ernst, of 1639 Hinman Ave., voiced doubts that approval could be obtained for a new landfill project from agencies that regulate use of the lakebed and said he didn't believe Evanston's road infrastructure could support the traffic that such a project would draw.

Alderman Jane Grover, 7th Ward, called the plan "a grand vision for Evanston's future" but said, "This is too large for my own imagination. I'm hamstrung to even picture this on the lakefront."

Update 9/6/11: Vasilko tells Evanston Now his intent was not to have the city pay for feasibility studies by independent consultants — that he is prepared to pay for them himself. The original version of the story did not reflect that.