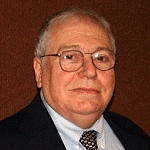 In the years after he and his wife Mary moved to a home in the 1300 block of Wesley Avenue, he was active in the Dewey Community Conference, which worked to improve the neighborhoods served by Dewey Elementary School.

Brugliera, who was trained as an engineer at Northwestern University, was a retired executive of the Zenith Electronics Corporation and a consultant to the cable and consumer electronics industries.

He was a member of the board of the IEEE Foundation.

A self-described "curmudgeon" and "recovering liberal," he was in recent years an occasional speaker before City Council and more frequent observer at council meetings on development and finance issues and a frequent commenter on the 8th Ward message board.

He was also among the first readers to start commenting on the Evanston Now website after it launched in 2006.