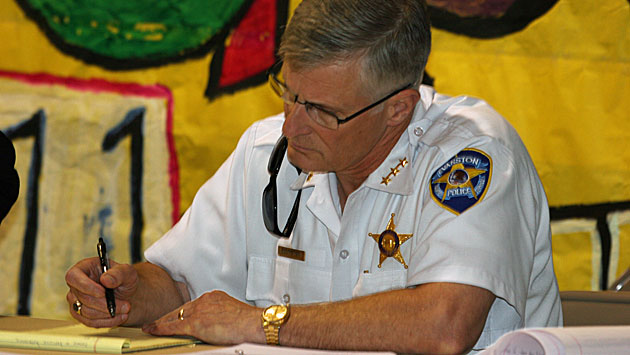 Plans for a police outpost at the Evanston Plaza Dominick's supermarket are moving forward, despite continuing complaints from some neighborhood residents.

Eddington has said he hopes having beat officers stop by the outpost — a desk in the store's entryway — will help deter liquor thefts by young people from the market, by persuading potential offenders that their odds of getting away with a theft aren't good.

The alternatives now are unappealing, he added. If a youth is caught, he ends up with a criminal record that will damage his prospects through life. If he gets away with the theft, his getting drunk is likely to lead to other crimes — ranging from robbery to sexual assault. 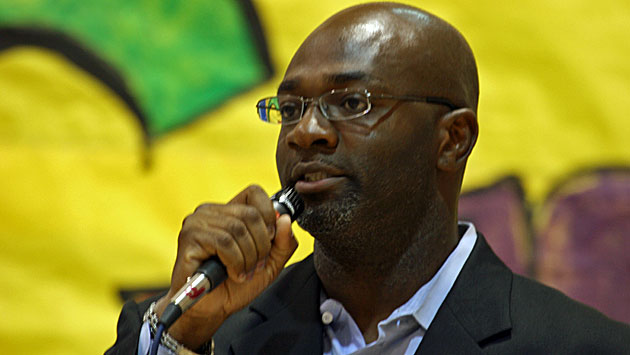 Top: Chief Eddington taking notes at the ward meeting. Above: Alderman Braithwaite speaking to the crowd in the gym at the Robert Crown Center.

Braithwaite said the situation with youth in the neighborhood is critical. "Families are impacted when somebody goes to jail," he said.

And he added that controlling crime is also key to his hopes for economic development in the area.

"When there's only one major store (Dominick's) in the shopping center, that's a concern," Braithwaite said.

It was the third public meeting in less than two weeks at which the outpost plan was discussed, and arguments from residents followed a similar pattern.

While a few speakers supported the outpost, others offered a variety of reservations.

Those ranged from suggestions that Dominick's should redesign its liquor section to make it harder for a thief to quickly flee the store or hire more security personnel of its own, to suggestions that an outpost — if there is to be one — should be located in one of the vacant stores in the shopping center rather than at the supermarket.

One speaker asked for a count of the number of thefts at the store in recent months so it could be compared with thefts after the outpost is in place.

However, published police crime bulletin reports include about a dozen such incidents in the past four months. (To see for yourself, search for 1900 Dempster, the block in which the store is located, and 1910 Dempster, the store's address.)