Evanston Preservation Commissioners tried Wednesday to broker a compromise between angry neighbors and the homeowners who have asked to relocate a historic home near the lakefront.

In a partial victory for the neighbors, the commission voted to rescind the approval it gave two months ago of plans to demolish part of the home.

(The portions proposed for demolition are shown in color on the sketch above.)

But commission members also told neighbors the site may include two existing buildable lots. If it does, the owners may be able to build a second home on the property, even if the city denies their plans to move the existing house and reconfigure the site.

Owners Janet and Jeffrey Clements with attorney Ray Gerard and original blueprints for the house.

The new homeowners and their attorney argued that their plan would restore the Queen Anne Victorian home to its original 1888 appearance. 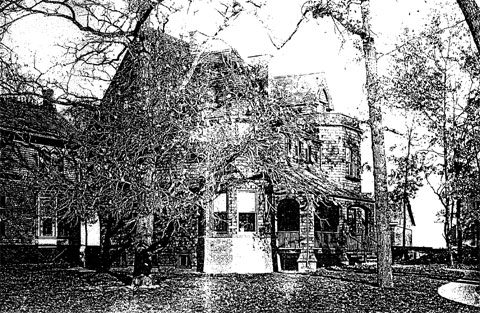 An early photo of the house, with its neighbor to the north on the left.

But attorney Frank Cicero, who has watched the house slowly decay for decades from his home just across the street, organized opposition to the plan and drew several dozen people to the commission meeting to oppose it. 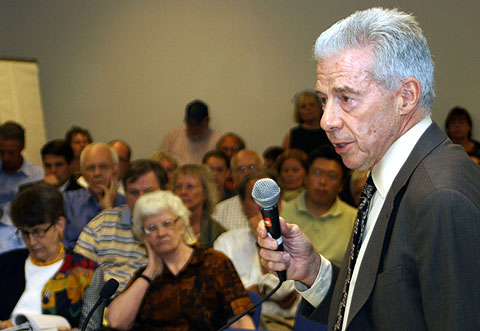 Frank Cicero, speaking for neighbors opposed to the project.

Cicero argued that the porte-cochere, or drive-through carport, added to the southwest corner of the house around 1910 has become a conspicuous monument along the grand concourse of Forest Avenue and is now historically significant in its own right.

He also complained that neighbors hadn’t been notified of the commission’s original meeting on the project and disputed the owners’ assertion that the site includes two buildable lots.

The existing lots shown on plats of the property 150 feet deep, running west to east from Forest toward the lake. The owners’ proposal would re-subdivide the property into two 75-by-96-foot lots with their narrow sides facing Lake Street. The existing house would be moved onto the more easterly lot.

The commission urged the property owners to get a definitive determination from city staff about whether the second existing lot is buildable and then meet with the neighbors to try to work out a compromise before another commission meeting to be scheduled in a few weeks.