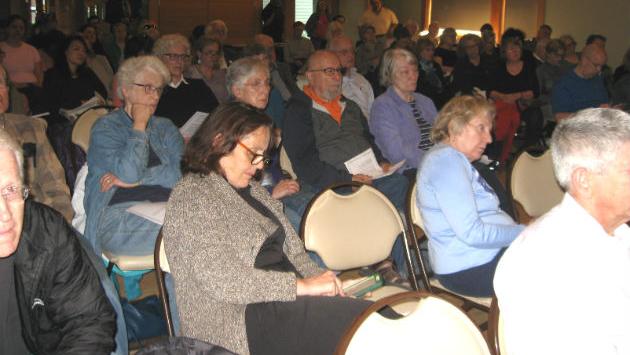 Few ideas about the city budget surfaced at a joint meeting of Evanston’s Sixth and Seventh Ward residents at the Ecology Center Tuesday night, but some expressed concern about reports of escalating costs for the multimillion-dollar project to rebuild the Robert Crown Center on the city’s south side.

Otherwise, the audience that filled the center’s meeting room listened to a recitation of major capital improvement projects by Lara Biggs, of the city’s Public Works agency, and raised the usual questions about the lack of property taxes paid by Northwestern University, which has been legally exempt from that obligation since its founding in the middle of the 19th Century.

Skeptics in the audience questioned the validity of a survey of 46 programs and services provided by the city that residents are being asked to help prioritize as the city seeks to trim its proposed budget for 2019 to a state of fiscal balance.

City Manager Wally Bobkiewicz admitted that the survey was not statistically valid but that it was part of the city’s attempt at priority-based budgeting, which asks residents to advise the City Council on such issues as whether they would rather see cuts to the $217,039 animal control budget or the $461,791 spent on hiring part-time crossing guards at 52 intersections while kids are coming and going from school.

He emphasized that the objective of the staff and City Council was to provide services desired by residents that make Evanston a “special place” in which to live while maintaining their financial ability to live here.

One suggestion a resident made was that the survey should have categorized the services, such as funding for the arts, public works, police and fire protection, and the like.

One resident questioned why salaries for public officials were rising when many of the residents were not experiencing increases in their own income.

Bobkiewicz responded that such expenses were necessary to maintain consistency with similar suburbs in the area.

As for specific projects, Biggs provided the following updates:

The replacement of the Central Street bridge across the sanitary canal will occupy much of the next two years, but that traffic will be maintained in each direction during the construction.

The city is only responsible for about 20 percent of the bridge replacement costs, with the remainder coming from federal funds.

The city is closely monitoring results of the health effects of artificial turf as it renovates the playing fields at the Robert Crown Center.

Renovation of the Lovelace Park pond is nearing completion.

Renovation of the downtown Fountain Square is in its final phase.

Replacement of city water meters is continuing, but that residents should be wary of admitting a stranger to their house to do the job without a prior appointment. If they have a question, they should immediately call 3-1-1 to get answers.

Next Tuesday, residents should not be alarmed to hear helicopters landing at Ryan Field. They’re just practicing to prepare for emergencies.

What do city services cost?