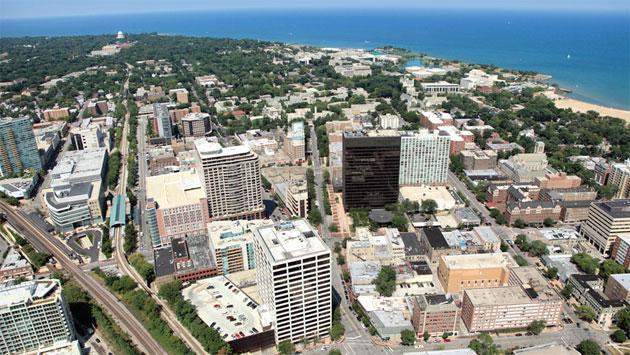 Once again owners of condos in a tall Evanston building are complaining that another tall building will obscure their views.

This time it's residents at 1570 Elmwood Ave. — variously known as Evanston One or the Winthrop Club.

They're complaining that somebody at city hall — we haven't heard who exactly — supposedly told them that under the downtown plan prepared in 2007 nothing taller than 42 feet could be built next door, at 1571 Maple Ave.

To save other condo buyers disappointment if the future, here's a guide to how to figure out what could be built next door to you.

First, don't rely on the downtown plan. While it was approved by the City Council, zoning changes that would have implemented some of its provisions have never been adopted. And it's the zoning code, not the plan, that really governs what can be built.

The maps tells us that, for example, the parcel at 1571 Maple Ave. is in the D3 district.

Chapter 11 of the zoning code deals with "D" — or downtown — districts.

And there we discover that: "The maximum building height in the D3 district is eighty-five (85) feet."

But wait, there's more. It goes on to say:

"Building height (floors or stories) when seventy-five percent (75%) or more of the gross floor area is devoted to accessory parking decks, up to a maximum of four (4) stories or forty (40) feet, whichever is less, shall be excluded from the calculation of building height."

Turn that into plain English and you get a maximum potential building height of 125 feet.

Oh, and one other thing. Evanston's zoning code provides for something called planned developments.

And that section of the zoning code makes it clear that if the City Council becomes convinced that a proposed development offers sufficent public benefits — they can waive the height limits otherwise imposed by the zoning code.

And almost all sizable developments downtown, including the one now proposed for 1571 Maple, fall under the planned development rules.

So when you buy a condo in Evanston, don't take it for granted that the view your unit has today will be the view that unit will have forever.