Residents of the Sienna condo complex at 1718 Oak St. have been forced to evacuate their homes afterÂ a parking deck on the site partially collapsed Friday night. 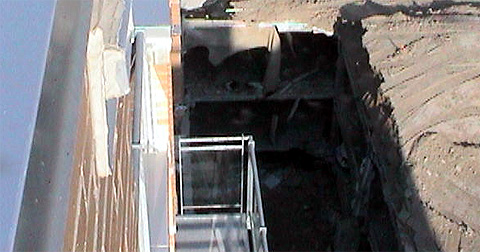 City officials say the top level of the parking deck collapsed, sendingÂ a 70 foot x 20 foot section of the parking rampÂ falling three stories to the basement level.Â  And a secondary collapse occured shortly after police and fire units arrived on the scene.

Residents of the 55 condo units were relocated. Limited access with fire department escorts was provided to allow residents to collect their personal belongings.

A fire fighter suffered a minor hand injury and several cars were damaged.

The cause of the collapse is under investigation. The Chicago Tribune reports that Tom Roszak, principal owner of Roszak/ADC, which developed the parking deck and condominiums, said the top level of the parking deck was being landscaped and that may have been a factor in the collapse.

The Sienna complex is being built in several phases, andÂ the parking garage and the evacuated units reportedly were completed about a year ago.

Mr. Roszak told the TribuneÂ he expects residents can return in about a week, but the parking garage, used by residents and employees of an office building across the street, will take much longer to re-open.