Prairie Joe’s restaurant on the corner of Central Street and Prairie Avenue will get new neighbors to the north if a proposed four-story, 13-unit condominum building wins city approval.

The project at 2607-2617 Prairie Ave. would replace what’s now a parking lot behind the Duxler Tire Center at 2620 Green Bay Road.

The Evanston Plan Commission is scheduled to hear more testimony on the project on Wednesday, March 15.

At the initial hearing last Wednesday, Developer Jim Ticus said Duxler plans to take down the part of its ‘L’ shaped building closest to Prairie to make room for the new construction and the condo developer will demolish a small two story structure on the north end of the property. 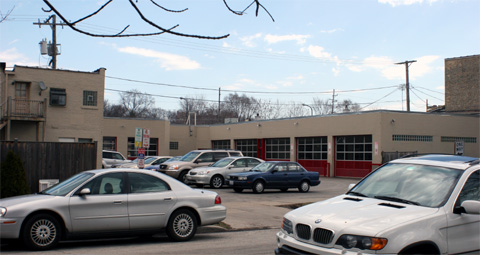 The proposed new condominium development would replace the garage bays from Duxler Tire that extend onto the Prairie Avenue frontage and the two story building visible at the left of this image. (Bill Smith photo)

The developers are seeking to have the property rezoned B2 and treated as a planned development.

Mr. Ticus told the commission that the project only slightly exceeds floor area ratio limits for the B2 zone and would contain less than half the number of units that could be built as of right in that zone.

â€œWe’re asking for four stories of height,â€ he said, â€œalthough at the front of the site it will be just three stories tall to match the height of the Prairie Joe’s building.â€

The new building would have 22 parking spaces and a 1,200 square foot retail space on the first floor with eight two-bedroom and five three-bedroom condos on the upper floors.

Project architect Jack Murchie said the design of the new building would pick up cues from the Prairie Joe’s building, including the â€œreally nice storefronts and awningsâ€ and the limestone sills and paired double-hung windows on the upper stories. 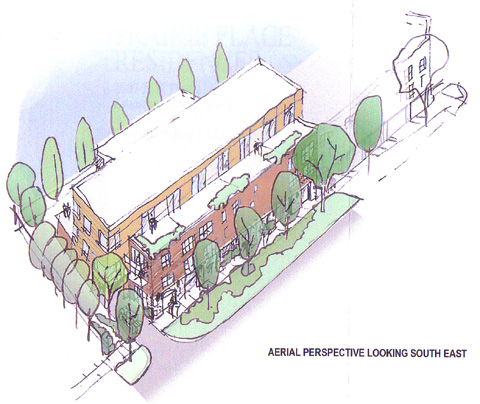 Landscape architect Ryan Kettlekamp said the project would include a buffer zone with trees at the back to shield the view of the auto repair shop.

The project includes several above-ground terraces, and Mr. Kettlecamp said it would have â€œextensive rooftop green opportunities, with plants hanging off balconies visible from the street below.â€

He said the project will also include a wide green strip in the parkway with plantings and that the developers would add a total of 17 new trees to the property.

The developer’s traffic consultant said that with the reduction in size of the Duxler operation, the total traffic on Prairie Avenue would be reduced as a result of the new development.