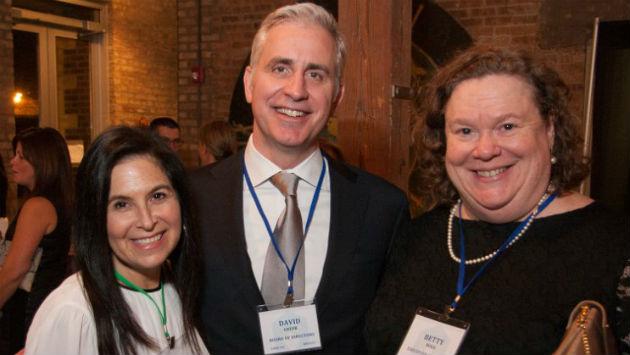 Connections for the Homeless says 280 people turned out for its annual fundraising gala last weekend and raised a total of $270,000, after expenses for the agency.

“This level of support from the community is so important right now, and we are extremely grateful,” said Betty Bogg, Connections’ executive director. “We are moving forward with our goal of increasing private donations to mitigate any future loss of funding that could result from the continuing State of Illinois budget impasse.”

“The donations we received through the gala represent both large increases from current donors and first donations from new donors. That’s what it will take for us to aggressively combat homelessness,” regardless of what the state does,” Bogg added.

The event, held at Architectural Artifacts in Chicago, took a different format than in past years. Instead of a sit-down dinner, 11 Evanston and Chicago-area restaurants set up tasting stations featuring one of their signature dishes.

Ward Eight and Temperance both supported the event with beverage donations.

Guests watched a new video featuring four of Connections’ program participants who had arrived at Connections homeless and living on the street. Each participant first made use of Connections’ Drop-In Center, which provides showers, laundry, and clothing, in addition to access to case managers.

All of the participants now live in Connections-run housing. In the video, they shared some of their thoughts about the transitions they have experienced.

Music at the gala was provided by the Lakeside Pride Strayhorns. Activities included a silent auction and a weighted raffle featuring several travel opportunities, sporting events, tickets to Hamilton, a necklace by Chloe, and a collection of assorted wines donated by Connections’ Board of Directors.

“We sought to ‘break the mold’ with the gala this year,” said gala chair Jill Greer of Evanston. “Connections does such amazing work, and our committee wanted the gala to be new and exciting so as to engage new donors and encourage current donors to increase their support. We also wanted to create a unique event that people will look forward to from year to year because it is different from all of the other galas. Judging by people’s reactions and the money we raised, we were successful!”

The success of the gala also came from the support of very generous sponsors. The Presenting Sponsor was Keystone Capital, with Silver Sponsors BMO Harris Bank, the Foglia Family Foundation, Honigman, and The Private Bank.

Connections provides housing, employment, and supportive services to move individuals and families out of the shadow of homelessness. It works to end homelessness by preventing people from losing their homes, housing those who are homeless, and helping each client to reach the greatest possible level of self-sufficiency.