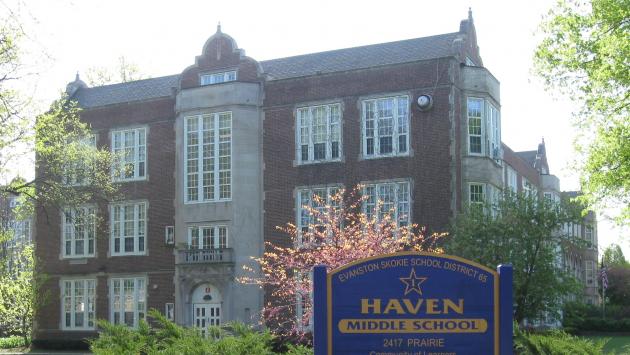 When students at Evanston’s Haven Middle School return to class Sept. 4 after the summer break, there will be an unofficial “class” built into their daily routine, thanks to major construction scheduled to begin as soon as the current school year ends. You might call it “Construction 101.”

First of all, the 85-year-old school will be encircled by scaffolding, as workmen will have pretty much replaced the entire roof and will be well along with extensive masonry work that will extend well into the fall.

Then there will be the inevitable dust, as the crumbling exterior of the building is extensively repaired.

But construction foremen may pop into classrooms where they are invited by the teachers to explain the work that is going on and how it all fits together like a lifesize Erector set or Lego project.

This scenario was outlined Wednesday to the Finance Committee of the Evanston/Skokie District 65 School Board by supervising architect Thomas W. Hutchinson of the Hutchinson Design Group, Ltd. of Barrington, IL.

“The first day of school,” he said, “will be a ‘wow!,’ after which it will become routine. We hope to make it a learning experience for the students.”

Hutchinson said the new roof will be warranted for 30 years, but he expects it to last 40 years or more, when present students will be in their 50s.

He was making a pitch to the committee for approval of a bond sale next month for an estimated $9.7 million in summer projects  that not only include roof and masonry work, but also locker replacements, asbestos abatement and tile replacement, air conditioning of the Nichols Middle School library and adjacent computer lab and other renovation work, gym door replacement at Kingsley elementary school, and the installation of building controls and storage sheds districtwide, in addition to technology improvements.

The committee discussed the proposed bond sale, but final action awaits a meeting of the full board. While this is tentatively scheduled for the regular meeting on May 21, Superintendent Hardy Murphy suggested that it be scheduled for a vote at the “working” board meeting on May 7 in order to give the contractor sufficient time to acquire the 1,000 feet of scaffolding required.

Otherwise, a delay in the beginning of the work after school is out would likely extend the inconvenience of construction work after students are back in school in the fall.

No referendum would be required to authorize the bond sale, as the district has an estimated $24.6 million in available principal in its debt service extension base, and the sale would occur at a time when interest rates are at historically low levels.

The summer work was not contingent upon the passage of the March 20 new-school referendum that would have authorized a sale of bonds that would have provided some $28 million for additional space at the district’s middle schools and magnet schools for classrooms and core activities such as gymnasia, libraries, and cafeterias to meet projected increases in enrollment.

Finance Committee Chair Andrew Pigozzi has advocated scheduling a new referendum to authorize the sale of bonds for those school improvements, but this was not discussed at Wednesday’s meeting.