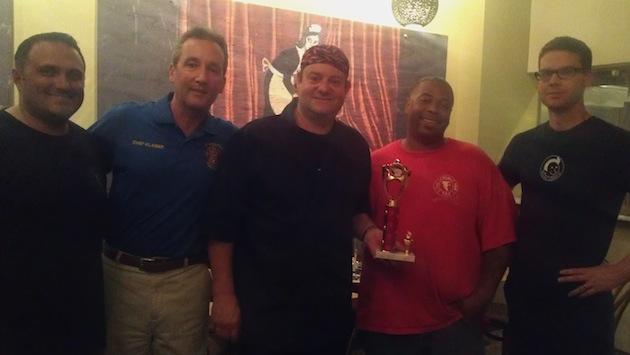 The event, called Fired Up, teamed up firefighters from Evanston's Station 2 and Station 5 to compete against each other for best dish at Company, located at 1307 Chicago Avenue. Co-owned by Golden and Lucky Platter owner Eric Singer, the concept restaurant, which opened earlier this year, hosts a rotation of guest chefs and pop-up dinner events. Golden is also owner of Union Pizzeria, concert venue SPACE and co-owner of Chicago's Longman & Eagle restaurant.

All proceeds from the event will be donated to the EPFF, said Fire Chief Greg Klaiber.

A friend of Klaiber's, Golden said he decided to help host the event to both raise money for the foundation and bring community members together for a fun evening.

With ingredients donated by Whole Foods, the Station 5 team whipped up chicken parmesean while Station 2 created their version of rolled and stuffed flank steak.