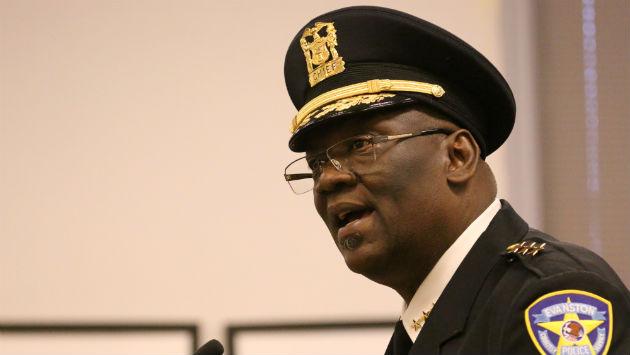 Demitrous Cook, when he was sworn in as Evanston's police chief in January 2019.

Demitrous Cook was sworn in as Evanston’s new police chief today before a City Council Chamber audience packed with police officials from around the region and community residents.

Cook, whose selection for the job by City Manager Wally Bobkiewicz was announced on Dec. 11, called on his mother, Frances Evans, to pin his new badge on his uniform.

Getting his new badge.

The swearing in ceremony for Cook, who had been chief in south-suburban Glenwood, drew a large contingent of police chiefs from the south suburbs, and Hazel Crest Police Chief Mitchell Davis read a proclamation from their organization in Cook’s honor.

Cook succeeds Chief Richard Eddington, who retired at the end of last month and attended today’s ceremony in his civilian clothes.

Audience members recording the event on their cell phones.

Cook, who spent 26 years on the Evanston police force, rising to the rank of deputy chief before taking the job in Glenwood in 2010, takes over the department here following many years of generally declining crime rates under Eddington, but with the department facing budget constraints that led to leaving some positions unfilled this year.

He thanked the former Evanston chiefs under whom he served and told the crowd he was “glad to be here.”

The city’s video of the ceremony.