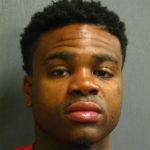 Evanston detectives think they’ve solved a shooting incident that resulted in an injury in the 900 block of Howard Street on Feb. 10.

It was at about 8:45 p.m that night that the victim was sitting in his car in a parking lot in the 900 block of Howard when the suspect approached him and they started to argue about a previous traffic altercation.

The subject then pulled out a handgun, police said, and fired two shots at the victim, who was treated and released at St. Francis Hospital for an injury to his left arm.

Investigating detectives made a determination that the shooter was Christopher D. Lawson, 29, of 5977 N. Clark St., Chicago, and they arrested him on April 11 in the 1900 block of Dempster Street, according to Cmdr. Joseph Dugan of the Evanston police

The felony review unit of the Cook County State’s Attorney’s Office subsequently approved one count of aggravated battery with a firearm against Lawson, Dugan said.