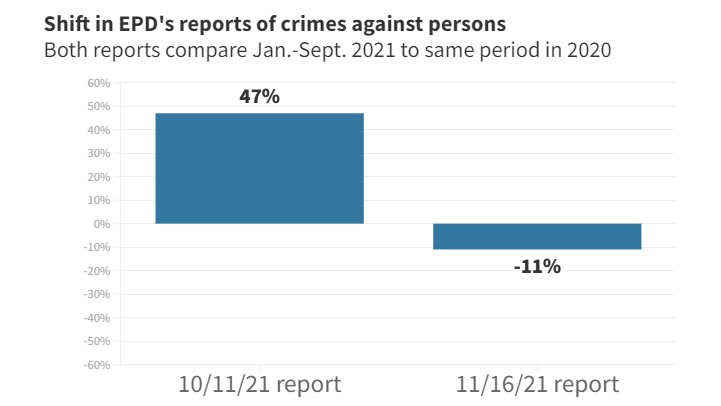 Evanston police now say violent crime in the city — crimes against persons — declined 11% in the first nine months of this year — a dramatic change from their report a month ago that had it increasing by 47%.

The first report was released by the Police Department on Oct. 11, hours after Evanston Now reported that the department had not disclosed monthly crime data all year and after weeks of effort by Evanston Now through inquiries to the department and a Freedom of Information Act request to get the data.

The new report is based on data presented on the department’s new transparency dashboard, launched earlier this month. It replaced an earlier dashboard that was widely criticized as containing inaccurate information.

A department spokesman, Cmdr. Ryan Glew, was unable to provide an explanation for the disparity between the figures issued last month and this month.

But he said further revisions to the new figures are likely. That’s because the FBI’s new National Incident-Based Reporting System requires local departments to list each victim of a violent crime incident as a separate crime incident.

Under the FBI’s previous Uniform Crime Reporting system, a violent crime with multiple victims was only counted as one incident. And the Police Department’s reporting system, Glew says, is still being adapted to meet the new FBI requirement.

The digital services specialist who was in charge of improving the police dashboard and other open data projects left the city 19 months ago. Filling that position had been proposed as part of the city’s 2022 budget recommendations from city department heads. But at their recent meetings on the budget City Council members choose not to include that position in the budget.