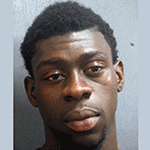 Evanston police this afternoon made the second stop of a person with a gun in as many days.

The incident reportedly began with a tip that someone with a gun was in a car in the area of Church Street and Dodge Avenue.

Police followed the car — a white 2012 Chevrolet — as it drove east to Ridge Avenue and then south on Ridge. Officers finally stopped the vehicle about 4:30 p.m. at Ridge and Austin Street, near St. Francis Hospital.

They reportedly have recovered a gun from a male passenger in the car, and also took the car's female driver into custody.

Olagbegi, who police say was was on parole for robbery and aggravated robbery, now faces felony charges of being an armed habitual criminal, possession of a defaced firearm and unlawful possession of a firearm by a felon.

He's scheduled to appear in Skokie district court at 9 a.m. on July 8.

Police say he's the fourth person arrested for gun law violations in Evanston in the past 10 days.