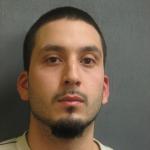 Evanston police recovered a 12-gauge pump shotgun during a traffic stop in the 1200 block of Hartrey Avenue last night.

As a result of the stop, the officers not only identified the two occucpants as having outstanding arrest warrants, but they also located and recovered the shotgun.

Placed under arrest under multiple counts of firearm violations was Hector Hernandez, 22, of Winthrop Harbor, Ill. His companion, Givanni L. Renteria, 24, of 642 Dodge Ave., was arrested on an outstanding warrant on a charge of resisting a peace officer in Lake County.

Hernandez is due to appear in Skokie District Court on March 12 at 9 a.m. Court date information for Renteria will be set by Lake County officials.