Evanston police say the body plumbers found in a catch basin behind 819-821 Howard St. Wednesday was that of an older white male who may have been dumped there more than a year ago. 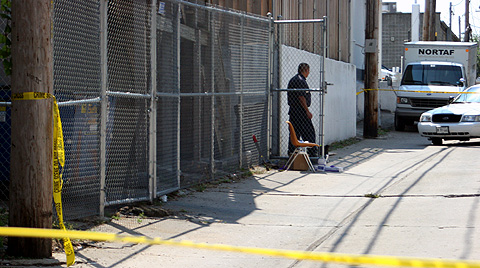 An investigator emerges from the fence that blocks off the catch basin where the body was found.

Deputy Chief Joseph Bellino, at a news conference this afternoon, said the medical examiner’s office has ruled the death a homicide by asphyxiation. 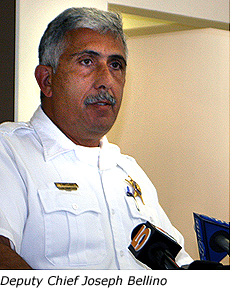 He said the grey-haired victim, whose body was partially wrapped in plastic, was fully clothed, wearing a multi-colored pullover shirt, tan slacks and gym shoes.

He said that no identifying papers and no tattoos or other identifying marks were found on the body, but that investigators hope to be able to obtain usable fingerprints and hope that dental records may also assist in determining the victim’s identity. There were no signs of trauma on the body.

The catch basin is located directly behind the rear entrance to a dental office that Chief Bellino said has been vacant for a number of years. A medical office occupies the other half of the building.

Chief Bellino said the building’s owner had noticed that sinks in the office were not draining properly and had hired the plumbers to rod out the drain lines.

Police vehicles block the alley near the crime scene.

They followed sound made by the power rodding equipment to the catch basin and found the body when they lifted its cover.

Chief Bellino said that while a chain-link fence was recently installed behind the building that blocks access to the catch basin from the alley, it’s not clear whether the fence has always been secured, or even if it was in place when the homicide occurred.

He said detectives have interviewed the building owner and hope to speak with the former tenant soon. They’re also interviewing residents of the apartment and condominium buildings across the alley from the crime scene to learn whether they may have observed anything that could help solve the case. 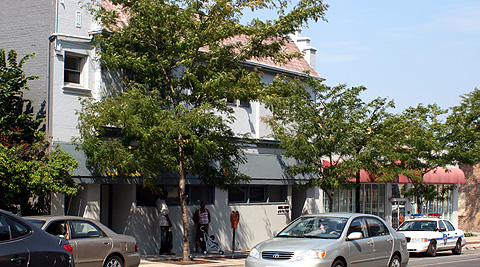 An Evanston Police car is parked near the building at 819-821 Howard St. where the body was found.

Thirteen years ago to the day, on Aug. 1, 1994, the headless, handless, decomposed body of a young Evanston woman was found in a storm sewer in an alley in the 1800 block of Emerson Street after neighbors complained of a foul odor coming from the sewer.

That case has never been solved. Chief Bellino said there’s no evidence to suggest a link between that crime and the body discovered Wednesday.