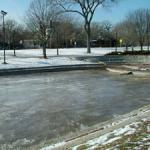 … and this time we're not talking about cars sliding on the roads. City officials say two of Evanston's three outdoor ice rinks now have ice ready for skating.

The good ice is at Ackerman Park and the lagoon in Dawes Park. But the Baker Park rink isn't yet skatable.

With heavy snow expected today and into Saturday crews are scheduled to try to clean off both the Ackerman and Dawes rinks Saturday morning to have them ready for skating by Saturday afternoon. To check on rink conditions call 847-859-7822, ext. 8.

New outdoor ice rink systems were installed at Ackerman Park and Baker Park in late December. This new system includes side boards, kick boards and a liner; it basically builds a small ice rink right on top of the turf. Once the weather became suitable, the plastic liners were installed and ice was made.

To keep the plastic liners from being torn by skate blades, skating will not be allowed until the ice is thick enough. Signs are posted to indicate when skating will be allowed.

No attendants are on duty to supervise the rinks and shelter houses are not open.

When is ice made? It takes three consecutive days of temperatures 15 degrees or lower to have sufficient frost penetration of the ground. It then takes at least six days of applying water to have ice thick enough to skate upon, and a warm spell will disrupt the ice-making process. Traditionally, the outdoor skating season is over by in mid-February.