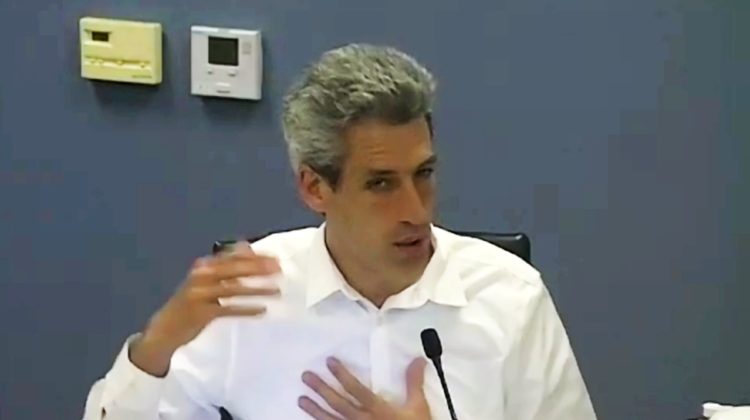 Mayor Daniel Biss tries to get a point across during the Rules Committee meeting Monday.

Evanston, already widely known for its high number of city government committees, is about to get two more.

The City Council, sitting as the Rules Committee Monday night, voted to create a Referrals Committee, composed of the mayor and two alderpersons, that would decide which committee should take up ideas proposed by council members or the city manager for new legislation.

Until now aldermen have made their own referrals directly to subject-matter committees. Some aldermen apparently felt their ideas weren’t being prioritized by the various committees or were getting lost in the shuffle of other business.

Alds. Eleanor Revelle (7th) and Cicely Fleming (9th) were appointed to that committee on a motion of Mayor Daniel Biss.

Ald. Devon Reid (8th) voted against the appointments, arguing that he or one of the other three new members of the Council should sit on the committee. But Ald. Melissa Wynne (3rd), who was chairing the meeting, responded that Biss himself represented a new voice on the Council

The Rules Committee also voted to adopt a plan introduced earlier this month to create a Finance and Budget Committee composed of up to five alderpersons plus three city residents with financial expertise.

That committee is being directed to, among other things, conduct a monthly in-depth review of the city’s financial performance, provide annual and long-range budget goals and propose financial and budgeting policies for adoption by the Council.

Much of that work has typically been done by the Administration and Public Works Committee or by the entire City Council in the past.

The meeting lasted more than three-and-a-half hours, and with new council members eager to make even more changes to the city’s procedures, the committee decided to hold another meeting in two weeks to take up some of those ideas.