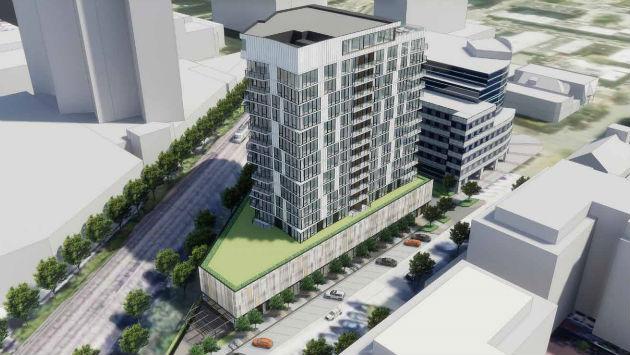 Evanston aldermen gave final approval Tuesday on a 6-2 vote to plans for a 17-story active-adult development at 1727 Oak Ave. downtown.

The development was first announced last October. It went through a lengthy series of community meetings and formal reviews leading up to Tuesday’s vote.

Opposition to the plans from some neighbors living across the street at the Sienna condominium development continued Tuesday. Their concerns centered on fears about traffic, which were not supported by a consultant’s study provided by the developer, and about convenient parking for caregivers of some of the 20 or so Sienna residents who are living with disabilities.

The neighbors said the caregivers shouldn’t have to walk the two blocks to the city’s Maple Avenue garage to find parking.

Johnny Carlson from the project developer, the Trammell Crow Company, said he’s been working on the parking issue and had reached agreement with the owner of the adjacent 1007 Church St. office building to make five parking spaces in that building’s garage inside the Sienna complex available for caregivers.

Alderman Peter Braithwaite, whose 2nd Ward includes the site, said he was convinced that the new development would not create traffic safety hazards for current or new residents.

He added that it would meet several City Council goals — providing 17 affordable housing units on site, about $1 million a year in additional property tax revenue and new jobs for Evanston residents.

But Alderman Melissa Wynne, 3rd Ward, said she shared the opponents’ concerns about safety “for a special community that has special needs.”

Alderman Cicely Fleming, 9th Ward, said Evanston needs to have more people living here. Opponents claim to not be opposed to building, “‘but it shouldn’t go here,'” she said, but “unless we’re going to build on park land, we don’t have a ton of space available to build on.”

That development will have 26 dwelling units upstairs and a garden center on the ground floor. No one spoke in opposition to that proposal at Tuesday’s meeting.