The vote came after more than two years of community debate on the plan to build 245 independent living residences, 24 assisted living and 40 long-term care residences and underground parking for 249 cars.

One of the new buildings will be 11 stories tall, the other 10 stories.

The plan preserves two existing private parks on the portion of the Mather property closest to Judson Avenue.

As part of the development deal, Mather agreed to open its south garden for limited public use.

Mather’s existing buildings are both eight stories tall, and some neighbors had fought the project over its additional height and bulk, while Mather residents and other neighbors supported the plan for new, more spacious and better-designed retirement facilities in the community.

Alderman Cheryl Wollin, whose 1st Ward contains the Mather property, was in Washington, D.C. attending a National League of Cities meeting. The unanimous vote was made possible when she was patched into the council meeting by speaker phone to cast her vote. 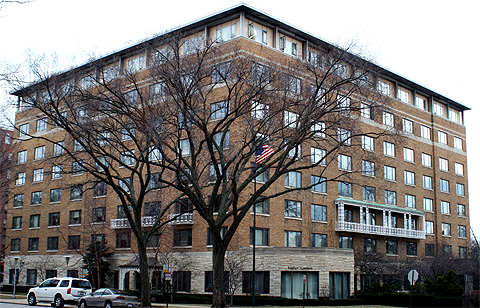 The Mather Gardens building on the north side of Davis Street will be demolished first under the redevelopment plan.

The redevelopment project will put the Mather property on the city’s tax rolls, and Mather has agreed to provide $30 million in financial assistance over 10 years, giving priority to Evanston residents and persons with family in Evanston. In addition the city will collect an annual easement fee of $125,000 for a tunnel under Davis Street connecting the two buildings which will be added to the Mayor’s affordable housing fund.