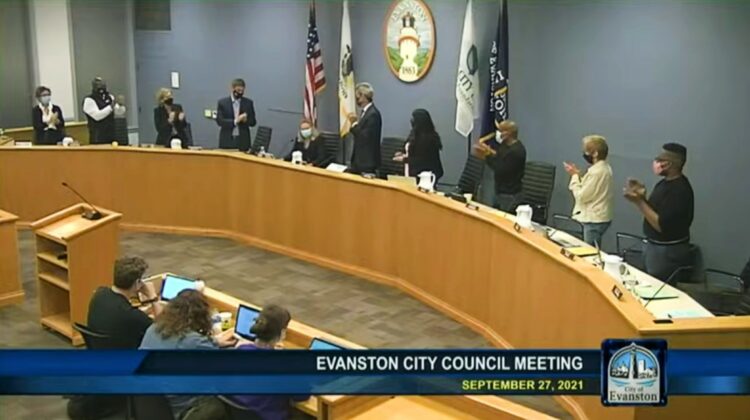 With some new council members elected in April on platforms that were clearly hostile to the current city administration, and two — Tom Suffredin (6th) and Cicely Fleming (9th) — re-elected who had voted against naming Storlie city manager last October — Storlie had clearly been on thin ice with the new Council since it was seated in May.

So the announcement in August that the Council had negotiated terms of an agreement for the manager’s departure should probably not have come as a surprise.

At Monday’s meeting Mayor Daniel Biss praised Storlie for her 17 years of service in which she rose through the ranks of Evanston city government and for her work in running the city during the COVID-19 pandemic.

Some of the Council members who had strongly supported the manager, including Peter Braithwaite (2nd), Melissa Wynne (3rd) and Eleanor Revelle (7th) also praised her performance, as did Devon Reid (8th) who had frequently clashed with her in his previous role as city clerk.

None of the other Council members spoke, and Fleming left the dais during that section of the meeting. Suffredin was participating in the meeting remotely.

For her part, Storlie choked up as she praised city staff for their hard work and willingness to embrace change and said Evanston is a place of unlimited potential.

The Council Monday also approved a contract with Cooperative Personnel Services, based in Sacramento, California, to conduct a search for a new city manager.