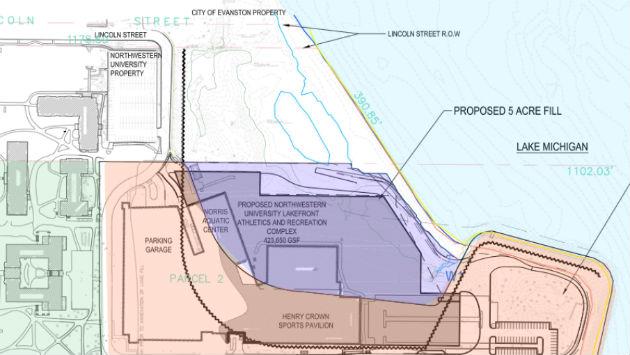 Evanston aldermen Monday postponed taking any action toward resolving the status of the beach just south of Lincoln Street.

City Manager Wally Bobkiewicz had proposed that the City Council authorize him to negotiate a memorandum of understanding with Northwestern University specifying operational details and maintenance responsibilities for the beach.

But given conflicting views about ownership of the beach, aldermen opted to postpone action while staff conducts further research on the issue.

During public comment, Jeff Smith, who once served as general counsel to the Illinois Department of Natural Resources, argued that the beach area is public land, based largely on IDNR rulings that beaches built up as a result of artificial barriers placed in the water are public.

Northwestern University received permission from the state to expand its campus into the lake in the 1960s and as part of that expansion created a crescent-shaped, north-facing beach in a cove at the north end of the lakefill, within the limit of the lake bed property the state conveyed to the school.

An aerial view looking north of the lakefill campus under construction in 1963 showing the beach area at top.

For decades only NU students and staff had access to that beach.

In 2015, as shown in the IDNR map at the top of this story, the university sought and was granted state approval to fill in much of that beach area to build its new athletic complex.

So now the dispute is over a strip of mostly east-facing lakefront running from the southern edge of Lincoln Street roughly one block south to the northern boundary of the state’s lakefill grant to the university.

The university is the owner of the riparian rights to that property, but Smith and other residents claim that the beach sand, because it built up as a result of the artificial filling of the lake, is now public land.

A Cook County GIS image from 2017, showing what that mapping system considers one university-owned land parcel highlighted in blue.

But at least some county records show that area as being within the boundary of property owned by the university, and Bobkiewicz told aldermen Monday that the university considers it to be its land.

City staff and university officials worked out an agreement for this summer under which the university would staff and maintain the beach while the city would be responsible for grading it.

Under that agreement, residents with city beach tokens or day passes and people with NU paid recreation memberships all have access to the beach this summer.

Without the university’s cooperation, it would be difficult for most residents to access the beach, since on-street parking is extremely limited and nearby parking lots and garages are owned by the school.

During the meeting, Alderman Judy Fiske, 1st Ward, complained that the area now “doesn’t look like a public beach.”

But Mayor Steve Hagerty said he doesn’t want to end up with a lawsuit over the issue. He also noted that NU now lets the public walk along its lakefront campus — something it wouldn’t necessarily have to do.

Some history behind the Lincoln Street beach (7/5/18)