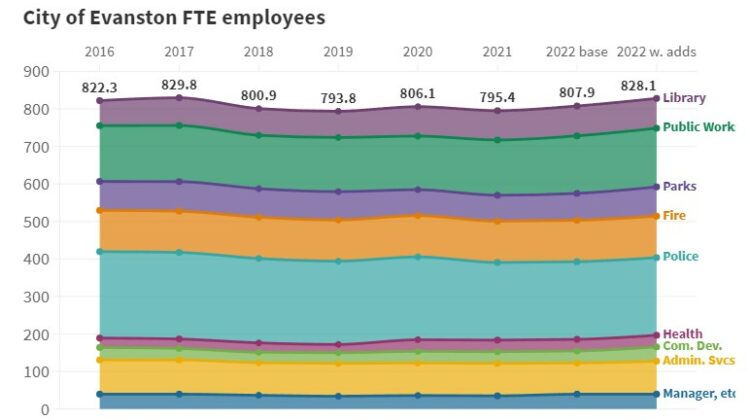 Evanston’s City Council is considering increasing the city’s employee count by up to 4% next year — the largest shift in at least six years — amid great uncertainty about where the revenue to pay those workers will come from once federal COVID relief funds run out.

That would bring the city’s employee count to just a shade below the peak it reached in 2017.

Community Development Director Johanna Nyden asked for six additional positions at an estimated cost of $634,000 to reduced delays in processing building permits and oversee work on a new comprehensive plan.

Parks Director Lawrence Hemingway requested 6.25 new slots to improve staffing at the new Crown Community Center and other facilities — at a cost of $478,000.

And Interim Public Works Director Edgar Cano requested three new positions — an arborist, a forestry crew leader and an equipment operator — at a cost of $335,000.

It was unclear from discussion among council members last week how many of the additional positions are likely to actually be approved.

Gandurski said all the new positions potentially could be funded in 2022 with a portion of the $43 million in American Rescue Plan Act funds the city is receiving from the federal government.

But the city is likely to have exhausted most, if not all, of the ARPA money by the end of 2023, leaving questions about whether continuing to fund those positions would lead to a big increase in property taxes down the road.

At Thursday’s 1st Ward meeting Leslie McMillan, a member of the city’s new Finance and Budget Committee, said the city should have budget projections looking ahead five years to project where funds for staff and projects will come from.

McMillan said it appears the city will face “a big gap” down the road that will require “either a large increase in the tax levy or a lot more debt issuance.”

She said Skokie does budget projections as much as 10 years into the future.

Evanston city staff did prepare a two-year budget projection a couple of years ago — but it ended up having little relevance after the coronavirus pandemic upended city revenue and expense projections.