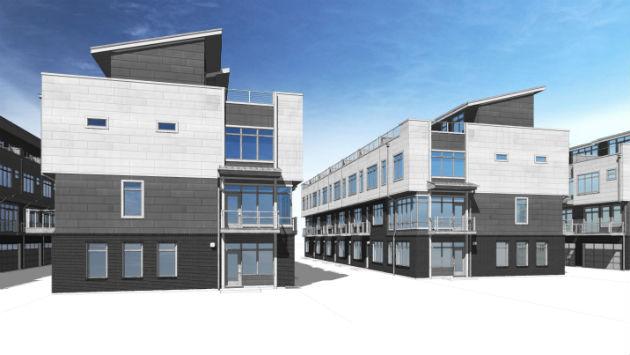 Evanston aldermen are scheduled to begin their review tonight of a proposal for a 40-unit townhouse development in the 900 block of Custer Avenue.

The project needs several site development allowances, including an increase in the number of units from the 32 allowed under existing zoning and a waiver of a rule that townhomes must face the street.

With the view of the Metra embankment across Custer to the east considered to be less than desirable, the developers argue that having the units face each other across a courtyard is the more attractive solution.

The property at 910-938 Custer, now is occupied by a vacant industrial building that formerly housed the offices, warehouse and factory of Dard Products, an advertising specialty firm recently sold to an athletic apparel manufacturer.

The developer has dropped earlier plans to request tax increment financing district funds from the city for improvements related to the project and has made corresponding reductions to the project’s proposed public benefits.

Items dropped from the benefits list include enhanced energy conservation measures to reach “net-zero” energy usage for the townhomes, funding for improvements to Fitzsimmons Park and contributions to the Main Street streetscape project.

But under the revised plans the developer will pay for upgrading the alleys abutting the project site, an item that had been seen previously as potentially being funded by the TIF.

The developer will also make a $400,000 contribution to the city’s affordable housing fund.

Update 3/12/19: The project was unanimously recommended for introduction after a brief discussion at the Planning and Development Committee Monday night and introduced at the full City Council meeting on the consent agenda.

It may be scheduled for a final approval as soon as at the City Council meeting on Monday. March 18.

Update 4/9/19: The project was given final approval at the City Council meeting on Monday, April 8, on a 6-1 vote with Alderman Fiske voting no.