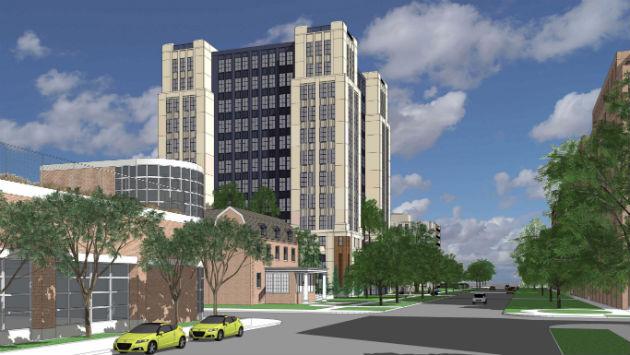 A project that could add 500 office jobs to downtown Evanston, but that has drawn negative reviews from city staff and the Plan Commission, goes before the City Council Monday night.

The project involves the sale of the city-owned parking lot at 1714-1720 Chicago Ave. for $4 million, rezoning the land from R6 to D3 and approving a planned development for the 13-story office building.

Because at least 30 percent of the owners of property within 500 feet of the site have signed a petition opposing the zoning change, the rezoning will require support of 7 of the 9 aldermen to be approved.

All 21 signers of the petition are owners of units in the condominium building at 1730 Hinman Ave., a block east of the development site.

When the aldermen voted to introduce and approve a contract to sell the property, commonly known as the library parking lot, for redevelopment in September 2017, only two aldermen, Melissa Wynne, 3rd Ward, and Eleanor Revelle, 7th Ward, voted against it.

Given low vacancy rates in Class A office buildings downtown, and sky-high prices paid in recent sales of such properties, the developers are confident they can fill the planned building.

A rendering of the proposed curve in the alley behind the office building.

But a proposed tight curve in the alley behind the building and questions over whether the building will have enough parking to accommodate building occupants and people who now use the open parking lot on the site have generated opposition to the plan.

Also fearful of the project are its low-rise immediate neighbors — the Woman’s Club of Evanston and the Frances Willard House.

Developers of the 601 Davis property, shot down by the City Council a year ago when they proposed a 33-story residential development — in late November requested a zoning analysis from the city for a possible 18-story office building on that site.