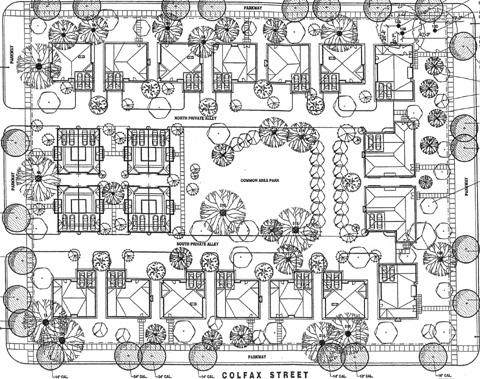 The long-running debate over what to do with the former Kendall College block in northeast Evanston moves to the City Council tonight.

Smithfield Properties is seeking approval to build 16 detached single family homes and eight duplex units on the site bounded by Orrington and Sherman avenues and Colfax and Lincoln streets.

Smithfield’s site plan
Neighbors opposed to the project have called for rezoning the entire site from its existing university district zoning to R1 residential zoning, which would block the developer’s proposal to include duplexes.

The neighbors have submitted enough petition signatures to require a super-majority vote of 7 of the 9 aldermen to approve the zoning map change.

Preservationists have called for saving Wesley Hall, the Kendall administration building constructed a century ago to house the Swedish Methodist Episcopal Theological Seminary, and converting it to condos. They have also urged preservation of other buildings on the block. 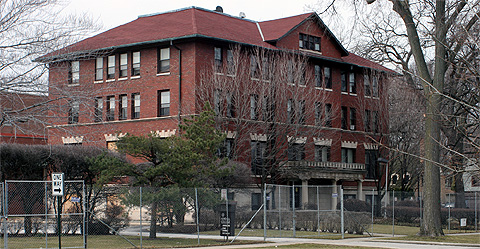 The Plan Commission deadlocked 3-3 on the proposal earlier this month.

Community Development Director James Wolinski, in a memo last week, noted that the Smithfield proposal would generate an estmated $1.06 million in annual property taxes compared to the $162,000 that the site yields in its current undeveloped state.

He also said the current Smithfield plan significantly decreases the density from its February 2005 proposal, which called for R4 zoning and a combination of 16 single family homes and 32 townhouses.

But he said a development that provided a standard block grid with public alleys and lots that met the R1 minimum size of 7,200 square feet would better fit the character and urban design of the neighborhood. He also noted that the houses the developer is proposing would be half a story higher than what’s permitted under R1 zoning.