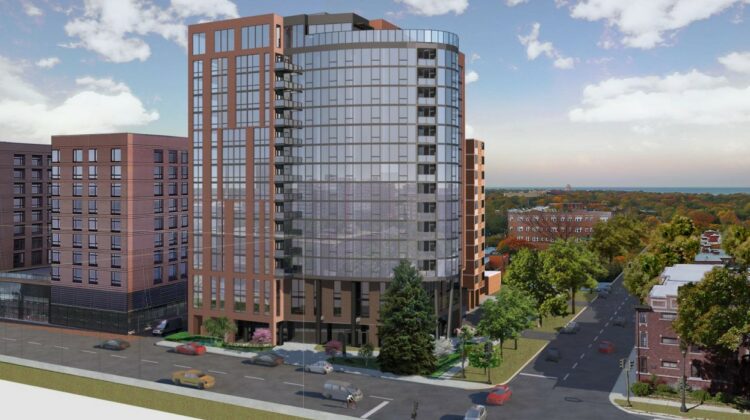 A September 2021 rendering of The Emerson, a proposed Housing Authority of Cook County development at 1900 Sherman Ave.

Revised plans for The Emerson, a proposed 16-story senior living development from the Housing Authority of Cook County, are scheduled for review by the Evanston City Council Monday night.

The plan revisions were necessitated by the discovery that HACC’s adjacent 11-story Perlman Apartments building, constructed in the 1970s, has a slab foundation rather than the deep foundation or caisson system more common for buildings of its height.

That meant the new building has to have a greater separation from the Perlman building than originally planned. As a result the revised plans reduce the total number of apartment units in the planned building from 168 to 152 and the number of parking spaces in the underground garage from 37 to 25.

The Plan Commission voted 4-1 last month to approve the revisions with with conditions requiring that HACC lease an additional 12 parking spaces within 1,000 feet of the property to offset the reduction of underground parking and that parking for residents’ caregivers be paid for by HACC, if requested.

The original plans were approved by the City Council on an 8-0 vote last November. But four seats on the Council have turned over since that time, so the vote could become a test of the new Council’s support for affordable housing developments.