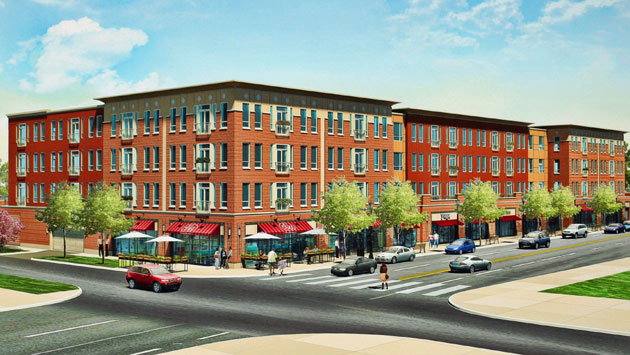 The approval came after developer Bob Horne of Dodge Capital LLC assured the City Council that last-minute objections neighbors raised — claiming the Hardie Board fiber cement siding proposed for parts of the building posed a health risk for for neighbors and children at nearby St. Athanasius school — were unfounded.

Horne said a government warning label on the product is directed to the person cutting the boards, and that there's no off-site risk. "There will be absolutely no risk to neighbors from it," Horne said.

Alderman Melissa Wynne, 3rd Ward, who had previously objected to plans for The Eastwood in committee, said she was now satisfied that parking provided by the project would be sufficient.

The only no vote came from Alderman Judy Fiske, 1st Ward, who said the 81 parking spaces proposed were inadequate and who said she'd like to see higher-quality finishes used on the exterior.

The project, at 1700-1722 Central St., was initially approved in 2007 as a four-story, 51-unit condominium development, but it never broke ground after the recession devastated the market for condos.

Horne says the condo market is still dead, but it's now possible to get financing for rental projects. The new design increased the number of units and reduces the amount of parking while staying within essentially the same footprint previously approved for the project.

Alderman Coleen Burrus, 9th Ward, said she's supported the project since the beginning, when she was on the Plan Commission. And she commended the developer for consistently showing a willingness to make changes in response to public comment.

Alderman Jane Grover, whose 7th Ward includes the 1700 Central St. project site, said she'd opposed the development when it was first proposed years ago, and at about the same time also opposed a smaller development, Prairie Central, just a block or so from her home.

But now that that the Prairie Central project has been completed, she said, she sees that "her worst-case scenario" didn't happen on that one. "It's a very good addition to the neighborhood," Grover said.

Some neighbors continued to argue Monday that the project should be sent back to the city's Plan Commission for further review.

But John Enright, owner of the Bluestone restaurant on Central Street, who plans to move his restaurant to a building across the street from the new development said The Eastwood would bring new life to a part of Central Street that's been less successful than the area west of the Metra tracks.