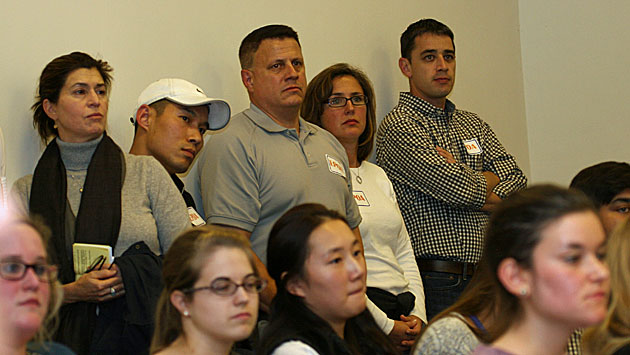 It was standing room only at Monday night's Evanston City Council meeting with dozens of landlords speaking to oppose a planned new rental licensing ordinance.

While a few home owners in apartment-heavy neighborhoods and an even smaller number of tenants spoke in favor of the measure, aldermen decided the proposal wasn't ready fo prime time and sent it back to city staff for unspecified revisions.

Replacing the city's existing rental building registration system with a plan that would license individual rental units has been under consideration at least since 2008.

The most recent version of the proposal was developed by a special mayoral committee that split 4-3 in June in recommending the version that was before aldermen Monday night.

Landlords objected that fines of up to $2,500 a day for renting an unlicensed unit could easily drive them out of business, and said that to comply with the city ordinance they'd have to violate state law that requires court hearings before a tenant can be evicted.

The conflict with state law issue appeared to be at least partially addressed by last-minute changes to the ordinance draft by the city law department following complaints last week from the North Shore-Barrington Association of Realtors.

While city staff insisted that the ordinance would only be used against properties with serious life safety code violations, the text of the ordinance contains no such limits.

The only certainty about the ordinance appeared to be that it would raise roughly an additional $500,000 in annual licensing revenue for the city.

While landlords would have to renew their licenses and pay a new fee every year, the ordinance anticipates that most rental units would be inspected at most once every four years.