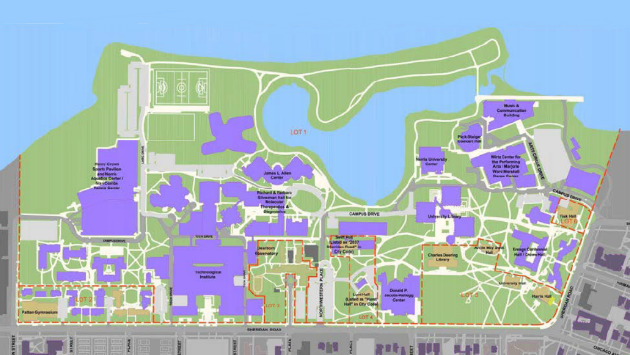 On an 8-1 vote the City Council approved a resubdivision of the portion of the campus east of Sheridan Road to place the 12 landmark buildings in five lots and place the rest of the property in a giant new lot, most of which would be exempt from the commission's review. The resubdivision was requested by the university in an effort to reduce delays in city review of the projects.

Until now the same area had been split into two lots — one containing property west of the original shoreline, the other the lakefill campus land created a half-century ago.

Because the commission has authority to grant or withhold a certificate of appropriateness for any major construction on a lot in the city containing a landmark property, the effect of the old subdivision was to give the commission authority over development on roughly half the campus area.

The City Council was free to overturn the commission's decision and approve construction projects anyway, and did three years ago in the case of the school's new visitors center and parking structure east of Fisk Hall.

Under the plan recommended by city staff, the commission will have a more limited advisory role with respect to projects outside the five lots with landmark buildings if the construction site is located within 250 feet of Sheridan Road.

Alderman Judy Fiske, 1st Ward, cast the only vote against the plan. She favored a version recommended by the Preservation Commission that would have given it full review power for any project within 250 feet of Sheridan Road.